My routine now when preparing for either a short trip or a long detail is to research the National Wildlife Refuges near the destination. My Kansas City summer (17 weeks through mid-August) is underway, and Squaw Creek came across as the most promising of the nearby refuges. I rented a car in downtown Kansas City Saturday and drove 90 miles up I-29 to the Mound City area. The refuge is three miles west of Exit 79 between the highway and the Missouri River. 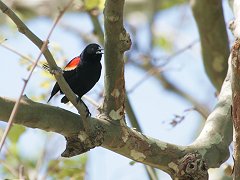 The best time to visit the refuge apparently would be in late November when an estimated 400,000 snow geese, 100,000 ducks, and 300 bald ealges migrate through. There's southern migration of the waterfowl in the spring, but there were only a few snow and Canada geese around so apparently I was late for that. There were plenty of red-winged blackbirds, and maybe it was my imagination but they seemed to be a lot fatter than the blackbirds I've seen elsewhere.

There is a 10-mile gravel road that loops through the refuge past ponds, fields and woods. There are three bald eagle nests located at the northwest corner of the loop near the intersection of the road to Route 118. One of the three nests is active. It was difficult to see due to foliage, but an adult bald eagle was visible in the nest. The volunteer at headquarters said it is believed there are two eaglets.

I did two loops around the road and also saw a small flock of egrets, herons, a kingfisher, pheasants, woodpeckers, turkey vultures, cucks, coots, a bluejay, a cardinal, and a swallow-tailed butterfly. I didn't take any groundbreaking photos, but I have posted a few to a Missouri gallery that I'll be adding to this summer. All were taken with Canon 1D Mark II and 100-400 zoom. Ideally I convert Canon RAW files using Photoshop CS and make adjustments on my color-corrected monitor, but I don't have those tools available to me today. These are just JPGs with a few adjustments made in Paintshop Pro on a bad monitor. I'll post better versions next week.

Late April wasn't the optimal time to visit Squaw Creek and I'm not scheduled to be here during the waterfowl and eagle migration, but May and August are supposed to be good for shorebirds during their migrations.