The Blue Angels and the Canadian Snowbirds were the center of attention at the Rhode Island Air National Guard Air Show at Quonset Point, Rhode Island over the weekend.

The Blue Angels of course is the name of the U.S. Navy's flight demonstration team. The team staged its usual display of aerobatic skill and power with its six F/A-18 Hornets. Besides the blue and gold paint, these are the same advanced fighter/attack aircraft flown off of U.S. Navy carriers. 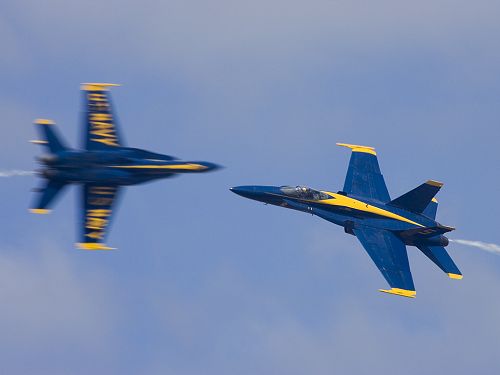 The Canadian Snowbirds are not elderly Canucks in RVs, but the Canadian Defence Forces 431 Air Demonstration Squadron. The team flies a much less powerful jet, the Canadair CT-114 Tutor, a training craft. It isn't even the current military trainer used by Canada, but the nine aircraft still make an elegant sight as the team members perform their precise maneuvers.

Saturday it was overcast for the Heritage Flight featuring an F-86 Sabre from the 1950's and two modern fighters, the F-15 Eagle and F-16 Falcon. It was still overcast for the Snowbirds, but cleared partially in time for the Blue Angels. Saturday's clouds probably kept a few people away and traffic wasn't too bad getting in and out. Everyone showed up instead on Sunday, Father's Day. Despite leaving an hour earlier than the day before, I missed the Heritage Flight and got to the front gate just as the Snowbirds were starting. There were enough blue skies to get a few decent shots, then it clouded over again, then finally it started clearing as time for the Blue Angels approached. 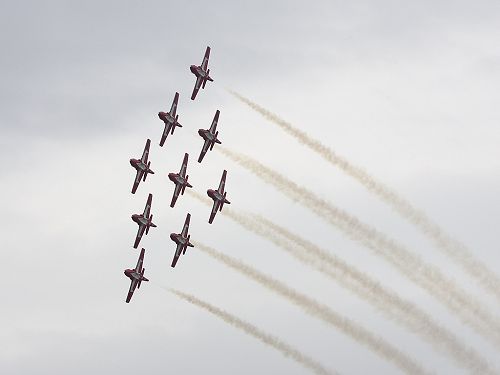 Both days I shot with my Canon 1D Mark II DSLR and 100-400mm lens. I usually just set the mode on "P" and ISO on 250. When it was sunny, this produced an exposure of about 1/800 at F/10. For those shots where the solo fliers rush at each other at a combined speed of 1,200 miles per hour and cross at center line, I set "AV" mode (shutter priority) with a shutter speed of 1/400 and panned with the plane approaching from the right. With the shutter knashing at eight frames per second, hopefully this meant I would get one frame where the plane from the right is sharp and the plane from the left is going by in a blur. I got a few decent ones but I didn't surpass some of my shots from the 2003 show.

I'm also posting one image taken with my new G6. It's of the Blue Angels' support aircraft, "Fat Albert," a Marine C-130. With the G6 topping out at 140mm I think it would have been possible to get a few decent formation shots. But for the opposing solos, gotta have that telephoto and eight frames per second.