Fortunately my employment does not require spending weekends at the office, but I did find a reason to head to the office Sunday – the Braintree Hawks.

Since 2002, May has been the month to watch red-tailed hawks being born and raised in our office park at the edge of the Blue Hills. The locale is the city of Braintree just south of Boston. The two parents built a nest in a tree just 50 feet or so from the building, and raised single chicks in 2002 and 2003, and twins in 2004. In 2002 while I was still shooting film, I got some good closeups of the fledgling Junior I. He camped out on a canopy just outside of our lunchroom for a couple of days, and it was there that he waited for his parents to drop off his lunch. In 2003, I was ready with my Canon 1D DSLR as Junior II posed on a picnic table right outside the window of our library. In 2004, I pointed a Canon ZR60 digital camcorder at the nest and let it run for an hour at a time as the twins Junior IIIa and IIIb grew up.

For whatever reason, the parents decided to build a new nest across the street this year, about 125 feet further away and much more difficult to see from our vantage point. Another problem is I've been in Kansas City instead of Braintree since mid-April. Junior IV probably hatched around May 1, so I was missing his childhood. When I was back in New England this weekend I headed over to salvage something from the year.

Back in April I knew the parents were building the new nest and I scouted for a good vantage point. I decided on a spot under the old nest, across the street from the new one. This spot gave me some elevation, but was far enough away that shooting with a long lens on an SLR would not produce interesting results. Instead, I planned to use my Televue 85 telescope.

With a 13mm Nagler eyepiece on the telescope, the view of Junior IV in the nest was quite stunning. The Nagler provided a wide field of view with 46x magnification. If weight is no object, a Televue 85 with a premium eyepiece such as a Nagler is better than any spotting scope. (But it is heavy.) After scoping out Junior IV for a while (and not seeing the parents anywhere in sight) I swapped out the eyepiece for my digiscoping equipment, my Canon S45 camera joined to a Meade 15mm Plössl eyepiece. The magnification was 40x with that eyepiece, but due to the way everything fits together the field of view was much narrower than I had observed directly with the Nagler. Junior IV filled the frame, so much so that I backed off to a 20mm eyepiece, 30x magnification. 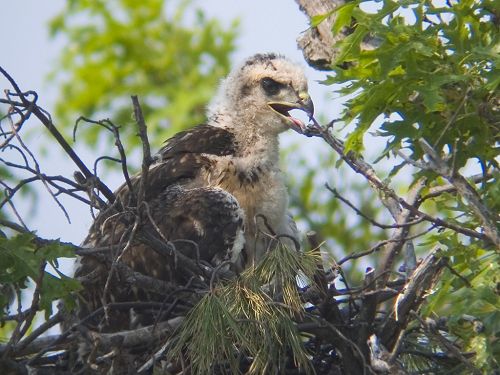 The S45 doesn't have a remote, so to get steady images I had to set the camera's timer. Two seconds wasn't long enough for the tripod to settle down, and the only other option was 10 seconds. So I just fired away, 5-6 shots a minute, hoping that Junior IV would raise his head as the time expired each time. I also took a couple minutes of video with the S45.

Eventually my battery ran out and Junior IV settled down for a rest. I probably wasn't there for more than 45 minutes. The photos and video I have posted aren't that great, but to me even a fleeting glimpse of a red-tailed hawk is worth a Sunday drive, especially if it's the new baby of old friends.