Once again it is Photo of the Year time, and once again I win because I'm the only one allowed to enter. As judge and final arbiter, I have duly awarded the grand prize to myself, which is (once again) an all-expense paid trip to Keokuk, Iowa in the dead of winter.

That's appropriate because the 2005 POY was taken in Keokuk, Iowa in the dead of winter. It's a bald eagle roosted in a tree above the Mississippi River on a January afternoon. 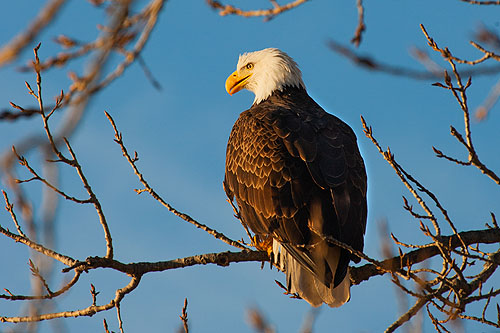 Here are the other photos I considered. Although I take most of my photos with a Canon 1D Mark II DSLR, three of these (Butterfly, KC Bee and Ireland) were taken with a Canon G6, which is a glorified point-and-shoot.

Here are my POY selections for 2002-2004. The first two are retroactive since POY didn't officially (whatever that means) start until last year. Although I don't claim to be a birder you may notice a trend here.