I made my annual eagle pilgrimage to the Mississippi River last weekend. I arrived at Lock and Dam 18 near Burlington, IA at about 1 p.m. to find the viewing platform and adjacent parking lot closed due to construction. So it was down to the boat launch in the recreation area, where for the first time I can recall, they were actually launching boats. It has been so warm this winter that there were just a few ice cubes floating in the river.

There were a lot of eagles in view, but most of them stayed well out of camera range. I took some distant shots, and a few turned out like the first one shown below. There were a several eagles roosting above the road on the way out of the recreation area. When I bought my car three years ago, I got a sun roof specifically to drive down this road and get the second shot. Click on the images for larger versions and to launch the slide show. 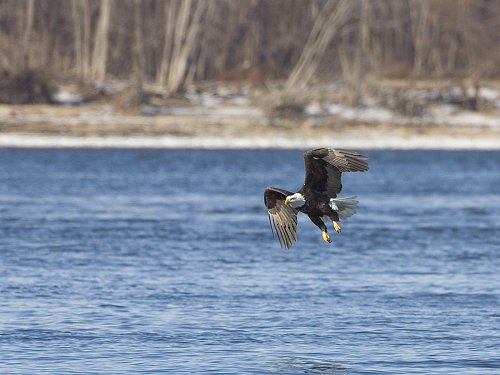 Eagle over the Mississippi 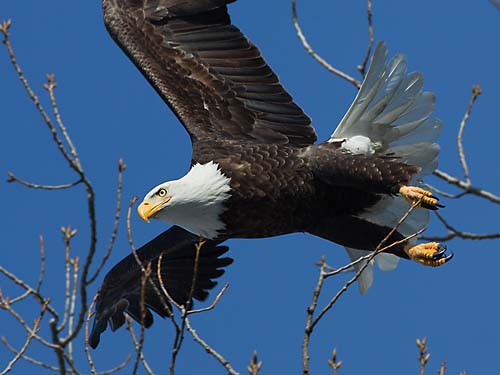 I continued on south to my other favorite Mississippi River location, the Keokuk waterfront. It was mostly cloudy, but with better light the next morning I "rushed" down to the waterfront. Unfortunately it's very difficult to rush through Keokuk because there is a stop light on just about every corner. Fifteen stop lights later, I finally arrived and got some decent shots. I headed up to Burlington mid-day and got a few more distant shots over the water, and closer but infrequent flight shots as the eagles made their way back to roosting areas.

This was the ninth straight year I've hit Keokuk/Burlington to see the eagles. On a scale of 1-10, this year was about a 6. This works best when the weather is cold enough to freeze the river and concentrate the eagles around the open water below the dams. Just looking back through previous years, I think 2008 was the best recent year.