I managed to get some decent shots during 2012 but nothing really popped out. I probably would have chosen an image of a bighorn sheep grazing in the South Dakota Badlands after a dusting of October snow, but the problem is I didn't actually take that photo. In the car, I passed my camera to my friend Sue because she had a better view, so she took the photo. Anyway, of the photos I actually took, I chose this from Squaw Creek National Wildlife Refuge in December. According to my Sibley bird book, this is a rare sight. The description seems to match a broad-winged hawk, dark morph. According to Sibley, the dark coloring is uncommon and is only found on the western edge of the species' range, which according to their map would include northwest Missouri.

The prize, as usual, is an all-expense paid trip to Keokuk, Iowa to hunt for wintering eagles in January/February. 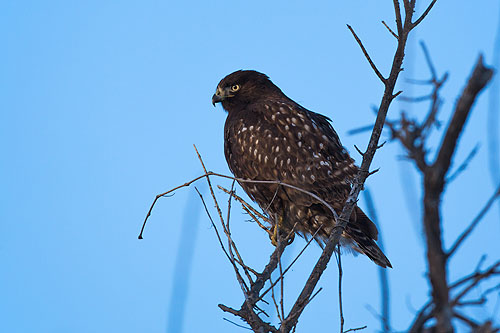