If September and October are the shoulder season for western South Dakota tourism, then November must be past the shoulder. However, with temperatures forecast for the high 60s, I decided to drive west Nov. 9-11. There was very little traffic as I made my way through the various parks, and the wildlife was as abundant as I've ever seen. Whether that's because the tourists are gone, I don't know, but it was very easy to get lots of images. The photo gallery includes elk, bighorns, bison, pronghorns, prairie dogs, coyotes, turkeys, and some celestial events. I saw at least six coyotes, all near prairie dog towns, and I was impressed with how well fed they looked. But the highlights for me, at least until I get a mountain lion on one of my trailcams, are always the elk and bighorns.

There are some national parks, Yellowstone and Grand Canyon included, where the elk are so tame that they lounge around in well-trafficked areas without a concern. I've never found that to be the case in Wind Cave National Park. That's why I've had trail cameras set up in the park for the past five years to get elk closeups that were very difficult to get with an SLR. Sometimes when I go down to check my cameras, I see elk on the far hillside and I can get a shot like this with the 400mm lens on my SLR. 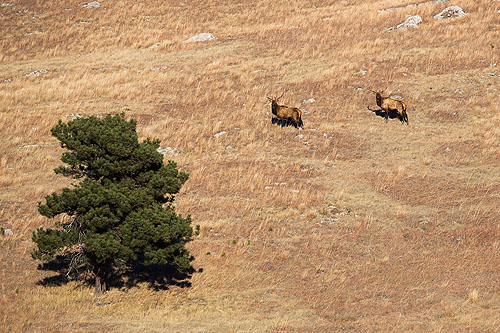 On this trip, I saw elk right along SD 87, which I had heard of but had never seen before. On the morning of the 10th I had a distant view of seven bulls grazing in a field near the highway. Then that afternoon, I stumbled across this guy getting a drink in the stream right next to the highway. 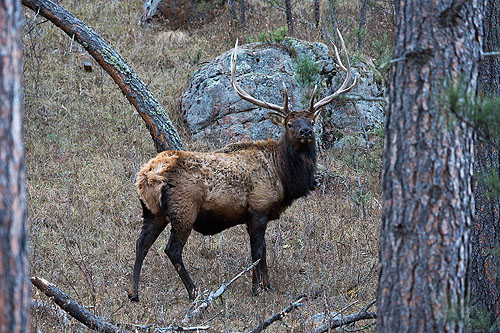 I haven't seen bighorns in the Black Hills recently, but I've seen them in the Badlands the last three times I've been through there. On Nov. 11th I saw two groups, one with a ram, five ewes and a lamb, and the other with a ram and two ewes. I got some good images of the rather lazy first group, then drove on and found the second group. I set up the tripod and big lens, and after a while through the viewfinder saw the ram heading in my direction with a wild look in his eye. I was debating whether to flee until I saw what he was actually headed toward. It's that time of year. I guess I wasn't in danger, but I retreated a few yards just in case. Nothing happened while I was there, but here's hoping that his companions have little ones next spring. 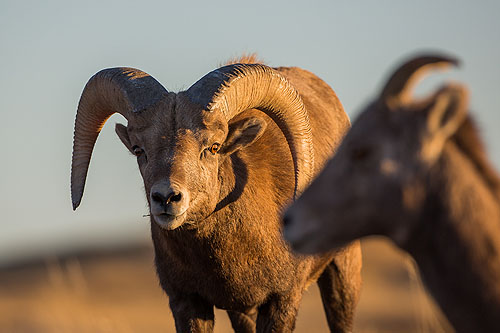