This is my twice-yearly trailcam update, but I posted only five images from the last six months. I'll get back to the trailcams later, but the best images from the trip were SLR shots of bighorn sheep in the Badlands. I also got some interesting images from Custer State Park of bison babies, bluebirds and meadowlarks.

I hit the Badlands on both legs of the round trip to the Black Hills. On Wednesday I saw 20 bighorn ewes but didn't see any rams. It was rainy and foggy so I didn't make the turn down Sage Creek Road. On Friday, I did take that road and found nine rams and eight ewes, including a group of four rams that I followed for more than an hour. At first they were grazing near the rim, and eventually three went down into the rough country. They provided hundreds of photo ops as they roamed around. The fourth ram, who appeared to be old and a bit beaten up, found a resting spot on the rim to take in the view. That is the last image in the gallery. Click on images to start slide show. 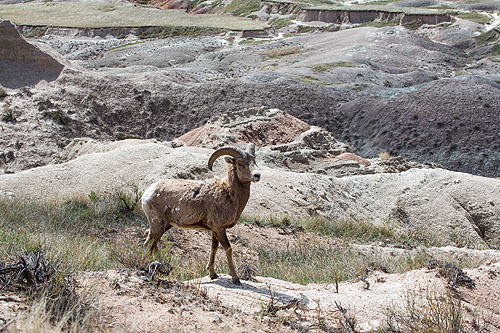 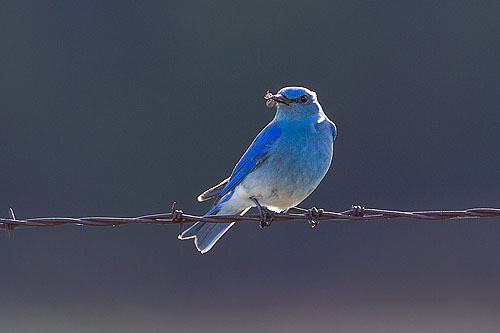 Regarding the trailcams, in an effort to shake things up I've been trying to figure out how to redeploy them:

Camera #1: I have moved the Reconyx from where it has been for five years to an area further south. Despite some good shots over the years, it can go for a month without seeing anything. I'm hoping for higher traffic in the new location.

Camera #2: The Moultrie has probably given me the best images since I deployed it three years ago. I had a bit of a scare this time as I could not find the camera. I had already concluded it was stolen or lost and had started hiking back up the hill when I finally stumbled across it. Last November, the strap broke, and I had to move it to a smaller tree. For some reason I didn't mark the new location on my GPS. Anyway, I left it in the same location this time and carefully marked it. It is a little bit north of the Reconyx.

Camera #3: The Primos is very tempermental and I would not buy it again. Last time, positioned near cameras #1 and #2, it fired off 70,000 images of waving grass before the batteries gave out. So I moved it to a more sheltered location 12 miles away in Custer State Park, which sort of worked except most of the exposures looked washed out. And except for one sequence of elk, most of the images were of deer. I moved it to a slightly different location in CSP and have no great expectations. But if a mountain lion strolls past, cameras #1 and #2 will be moving.

In summary, the Reconyx is an excellent trailcam but I probably won't buy another one because it is expensive and I don't think they've really upgraded them in recent years. I can buy four Moultries for the cost of a Reconyx, so my next camera probably will be another Moultrie or perhaps a Bushnell. Every once in a while the Primos takes a good shot, but the false triggers and the confused exposures lead me to conclude it wasn't worth it to save a few bucks on this cheapo brand. Generally speaking, I'm not happy with trailcam image quality, even with the high-end Reconyx, but I understand I'm not in the usual demographic for these devices. 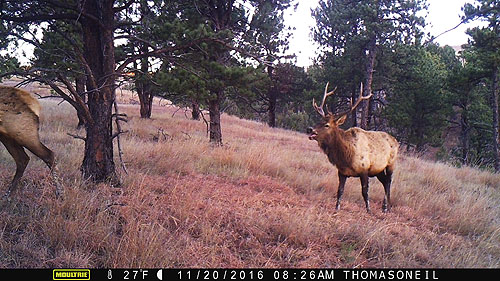 One of the better recent images from camera #2

Even though it is necessary to travel to wildlife hot spots to see the most spectacular displays, every once in a while there is the reminder that some wildlife tries to make the best of the urban landscape. When I got home last night, I put my rosemary plant out on the deck where it will spend the summer. This morning I was startled to find a duck sitting on my rosemary plant! Before I could finalize dinner plans, she flew away. 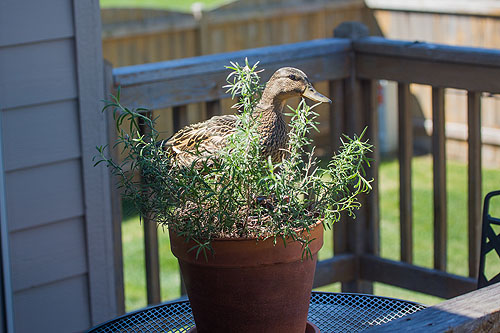