A Brief History of (My) Trailcams

I’ve been dabbling with trail cameras since 2009 so I thought it was time to mark them in my database so I could have a custom web page. I thought it would be a big project but I actually did it in about an hour. One thing that surprised me is I had only posted 147 images in eight years. I would have guessed a lot more.

All but a couple are from Wind Cave National Park near Highland Ridge Road, with elk the primary subject. I had seen some elk in the area and tried to pick a spot where they were likely to pass. I started with a location west of the road at the bottom of a hill. Then due to elk activity I had observed on a hillside to the east, in 2012 I moved across the road and have been in the same general area since.

Best image from west of the road

My first camera was a bulky Bushnell that used big “D” batteries. NiMh rechargeables only lasted a few weeks so I tried to augment with a solar panel. One of the elk decided to chew on the solar panel cord and put an end to that configuration. I went looking for a better camera and in 2011 settled on my current #1 camera, a Reconyx PC900 (no glow). The Bushnell sat for a couple years before being revived briefly in 2014 when I got some cheap “D” cells on clearance at Target, but after I used those up it went into permanent retirement.

Reconyx is the premier name in trail cameras and prices its products accordingly. Battery life is impressive, sometimes 18-24 months. But even with a high-end camera, image quality usually doesn’t measure up to what you can get from a cheap consumer point-and-shoot or even a cell phone. I suppose there are reasons for that, such as the use of fixed focus. That allows for quick response when triggered and holds down the cost, I suppose. Also, I don't fall into the usual demographic for purchasers of trail cameras. I think most customers just want to know that there is a big buck out there for them to harvest and don't care about image quality. 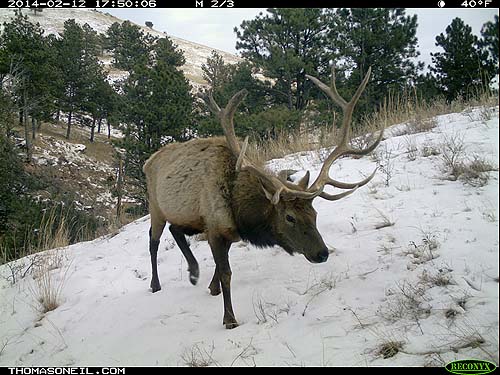 Winter scene at the "new" location

One crazy factoid is that of the 147 images, 20 of them were obtained within 2-3 hours of my first deployment of the Reconyx on July 2, 2011. The 20 were the best of a sequence of 500 images of two elk shot in quick succession in less than 15 minutes. They lingered in front of the camera, seemed to pose, then a couple times acted like they wanted to take a bite out of it. If only they were always so cooperative. I could have posted 300 good images out of that sequence, but it would have been a bit repetitive. But I have gone back six years later and added nine more images to the posted sequence.

In 2014 I acquired my current #2 camera, a Moultrie M-880 Low Glow. The Moultrie images are easy to spot on the thumbnail page as they have a wide aspect ratio consistent with HD video. The Reconyx does not have a video mode and I have not experimented with it on the Moultrie. Moultrie images also have more of a reddish cast while the Reconyx images are greenish. I've figured out a couple of Photoshop Elements adjustments that bring the color closer to reality, but there will always be differences between the cameras.

In 2016 I went cheap and put a Primos Proof Cam 02 (low glow) into service as camera #3 and had nothing but trouble with it. Bottom line is daytime images are almost always washed out (overexposed) and this camera is much more susceptible to false triggers than the other two. First time I checked the camera it had 60,000 images of waving grass. I tried it at a couple locations in Custer State Park that I thought would be more sheltered, but it didn’t get much better. Even though there are five images from the Primos in the gallery (as of today, the last five images), I just don’t think it is worthwhile to keep feeding it batteries to get yellow-cast, overexposed crap. The Primos is currently under my deck at home trying to get images of bunny rabbits. It's like being sent down from the majors to rookie ball. In that application I was hoping to use rechargeable batteries rather than expensive lithiums, but my rechargeables don't work in the Primos. 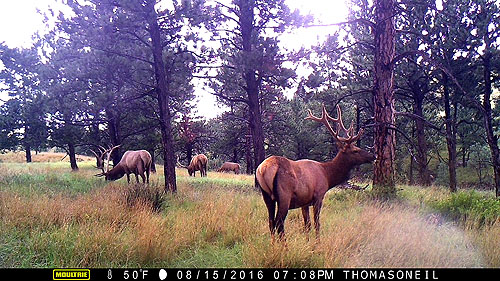 One of the best from the Moultrie

So today I ordered a new camera #3, a Browning Strike Force HD Pro. I had considered getting another Reconyx, but the price difference is astounding ($660 vs $160). I would probably go with the premium product if I had assurance some dirtbag wouldn't steal it. Considering I leave these things out in the woods for six months at a time, theft is a consideration. The Reconyx is secured with a Masterlock Python cable, but a couple years ago I had to cut through one of those using just my Leatherman so I know that only discourages casual thieves. Although the cameras have recorded a couple of instances where people walked by, the biggest risk to the cameras so far has been the elk. Besides the elk chewing on the Bushnell solar panel, there have been at least two instances where elk jostled the Reconyx (2011 and 2017) and one in 2014 where an elk nearly ripped the Moutrie off the tree and somehow loosened the cable lock. The Moultrie hung crooked for the next five months but some of the crooked images were actually good and I posted 10 of them in the October 2014 update.

A few times the elk fogged the lens with their breath. In a strange way, that's maybe what I like about trailcams. They allow you to get close to the animals without spooking them. I have found some national parks (Yellowstone, Grand Canyon) where fat elk lounge around near the visitor center, but that is not the case at Wind Cave. I have found elk in the Black Hills to be very skittish so I feel more of a reward when I get something good.

What is next? I would like to get images of mountain lions. I have a location picked out in Custer State Park where I was planning to put the Primos, but since it didn't measure up it will be a few months before I can get the new Browning out there. I've also thought about some sort of remote solution for imaging burrowing owls in the central South Dakota grasslands. A trailcam might work, but I've also thought about setting an SLR with a tripod close to the burrow and remotely triggering it from my truck 100 yards away. Either solution has advantages and disadvantages.

Click here to bring up the web page with the 156 thumbnails, including the nine "new" ones. I don't have the images set up in a slide show, so to see the next image you may have to return to the thumbnail page.