One of my favorite photos from my September 2003 trip to Yellowstone is of a bull elk in a meadow. There were at least 20 photographers with big lenses gathered around, snapping away at the elk. Meanwhile, along the road where all the vehicles were parked, a coyote strolled past almost unnoticed and unconcerned about the gaggle of humans who were watching the elk.

It was deja vu all over again this week, except this time Yellowstone was under a cover of snow and the star of the show was a coyote. Once again, the photographers with the big lenses made their presence known. For me, nature photography is a solitary pursuit and I've never paid for a workshop. I'm not a fan of packs of guys (almost always guys) piling out of a vehicle to stalk an animal. No doubt Yellowstone and Grand Teton are more spectacular than Custer State Park and the Badlands, but I've never seen a van full of photographers in my local parks. This week in Yellowstone, I was in a snowcoach full of regular tourists with camera phones, but I had my 5D Mark III/100-400 hiding in my backpack in case something happened.

It was an uneventful day, lots of snow-covered scenery but only a few bison on the road, until we were well on our way back to West Yellowstone when a coyote was spotted on the ice of the Madison River. About 10 guys with big lenses were lined up on the bridge firing away. The snowcoach driver disapproved of them stopping their vehicle on the bridge, so he found a pullout a little further on, and I got a few shots of the coyote on the ice working her way toward us. She came through the guardrail just west of us onto the road, then took a pee. (That's why I think it was a she. I got an image of that but I'm not posting it.) She then headed for the north side of the river and started working her way along the bank headed west.

The most interesting part of her journey was when she climbed up a snow-covered tree trunk to get up the bank to higher ground. I didn't think a coyote would try to do that, but I was wrong. The climbing sequence of images starts with the eleventh image in the slide show. Then she had to plow through some deep snow on her way up the hill. The last I saw of her she was up in the trees. 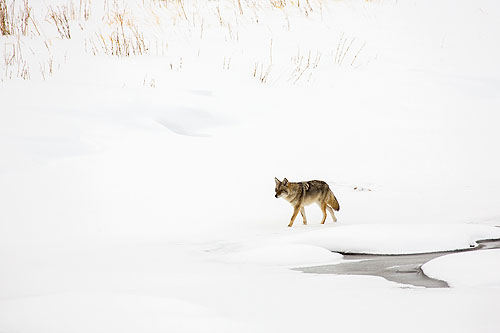 Coyote on the frozen Madison River