(Originally published on Squeezebunt.com in 1999. I haven't been back to Cooperstown for the ceremonies since then so the parking and traffic situation may have changed.)

There is a Yogi-ism that goes, "Nobody goes there anymore. It's too crowded." With Yogi Berra himself sitting on stage (or so I'm told), that's what was running through my mind as I found my way through Cooperstown to the 1999 Baseball Hall of Fame induction ceremonies. They announced that it was the largest crowd ever to watch the ceremonies. Due to the large area in front of the stage marked off for reserved seating, it was impossible for us riff-raff to get close enough for a decent view. The sound system was very good so it was possible to follow the proceedings audibly at least.

Willie Mays, Hank Aaron and dozens of other Hall of Famers were introduced, but the man introduced last to great applause, as at the recent All-Star Game, was Ted Williams. It is interesting to see how Ted has become the grand old man of baseball, and it's amazing how many people thanked him during the ceremonies, not just in passing, but as an important figure during their careers.

It seemed like a political convention with the blue-hatted George Brett backers, Texans for Nolan Ryan, flag-waving Puerto Ricans for Orlando Cepeda, and cheeseheads for Robin Yount. (As a native of Wisconsin I was disappointed not to see any actual cheese hats, but they probably would have melted in the heat.) But rather than just one winner, there were these four big winners along with several other honorees from earlier days. Considering that speechifying is not a strong suit for most ballplayers, it's not surprising that probably the best speech of the bunch was one that didn't make it on TV, by the son of the late umpire Nestor Chylak. Nestor sounded like an excellent person in addition to being an excellent umpire, and I wish some of the current umpires would pattern their behaviour after some of their predecessors. 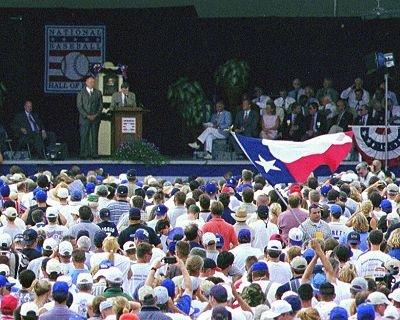 An underlying current was who is not in the Hall of Fame. Barely audible on the TV soundtrack were shouts of "Pete" when commissioner Bud Selig started with the introductions. In case you haven't been paying attention, Pete Rose was a shoo-in for induction but managed to get himself thrown out of the game for gambling. Also in evidence was a banner carried through the crowd implying that the Baseball Writers of America are racist for not voting in Tony Perez.

Cepeda, who also was bypassed by the writers before being voted in by the Veteran's Committee, spoke of his hope that fellow Latin ballplayers Perez, Tony Oliva and Luis Tiant would be in the Hall someday. Cepeda had the funniest line when he said of his time as a teammate of Brett, "When I saw him play, I say, 'This kid is never going to make it.'" But then he admitted, "Sometimes you make mistakes." Brett said later, "I'm glad you don't scout for the Royals, Orlando."

Yount echoed the Lou Gehrig line, "Today...I consider myself...the luckiest man...on the face of the earth." So familiar that it's a cliche perhaps, but I heard the words echoing off the Cooperstown hills and trees and it reminded me of the echo on the tape from the original Yankee Stadium moment of 60 years ago.

The theme that ran through Ryan's speech was the importance of coaching and conditioning. Not a flashy speech, but he left his flash on the field over the course of 27 years. You knew Ryan wasn't going to get choked up, but Brett sure did when he mentioned his brothers, his mother, his late father, and Jamie Quirk. He laid it all out there, just like when he played. That was the teary wrapup to the day.

If you go: Cooperstown is a small village between Syracuse and Albany, NY. The National Baseball Hall of Fame and Museum is downtown, as you might expect. The Hall is jam-packed during induction weekend, so it might be best to plan a museum visit for a quieter time. Doubleday Field is a couple blocks north of the Hall. The induction ceremonies site is south of town at Clark Sports Center. The Hall of Fame web site mentions shuttle buses running from various parking areas, but I accidently found a way to avoid Induction Day traffic and get a very good parking space within walking distance of the site.

My suggestion is to approach Cooperstown in the early morning (9:00 or so) on Route 52 from the east, and park in the Beaver Meadow Road area. (Get a good map!) Residents along Route 52 offered parking in 1999 for $5-10, but you also might be able to find a free spot along the highway. The induction site is a couple hundred yards away just across a bridge. Stake out your spot by planting a couple of lawn chairs, coolers and blankets (they won't get stolen), then hop a shuttle bus downtown to see the madness down there for a while. If you like standing in line, you might try to get into the Hall before heading back to the induction site. After the ceremonies, jump in your car, head east on Route 52, and you are immediately out of town.

This assumes you are just attending the induction ceremonies. There are other activities over the course of three days, so check the official web site to get the up-to-date information.

P.S. Bring good binoculars. Unless you have VIP tickets, the induction stage is a long ways away.