I returned to Kansas City this morning after the long holiday weekend in the Milwaukee area. I was born in Wisconsin so it could be said it was a homecoming of sorts, but actually I've never been in Milwaukee before, my family left LaCrosse on the other side of Wisconsin when I was age 1, and this trip represented more time in the state than any previous visit that I recall.

I wanted to accomplish three things over the weekend: Visiting Horicon National Wildlife Refuge northwest of Milwaukee, taking in a Brewers baseball game or two, and touring the legendary home of the Green Bay Packers, Lambeau Field. And that's what I did. I decided to travel light and not take binoculars or a good telephoto lens. On one hand that was a mistake because I missed having them, but on the other hand my bag was still plenty heavy.

What photos I did take were with the awful Tamron 28-300 on my Canon 1D Mark II, and my Canon S45 point-and-shoot. The Tamron is so light compared to my Canon "L" lenses, but it is not a good lens. My dilemna for next month is what to take on a baseball trip to St. Louis. The debate will go on inside my head until I have to pack. Here's one from the Tamron that at least shows what it is supposed to show, the sausage race during Sunday's baseball game. If you don't get it, there's no way to explain it. 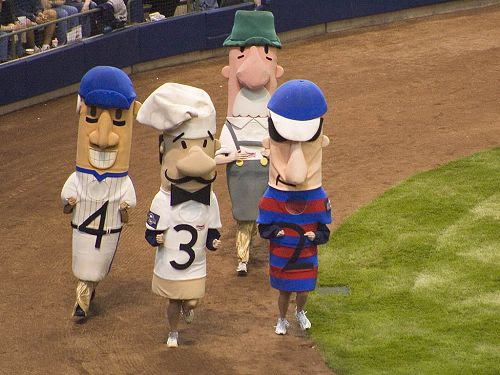 This is the first trip where I've been able to web post brief (very brief) text updates using my cell phone. This capability is the primary reason I'm using Blogger or Blogspot or whatever they call this site. "I can see two harriers right now," demonstrates the potential of instant text updates. This would be really cool if I actually had something to say. If I had a camera phone I could also send images, but the only camera phone supported by VirginMobile is a tiny 0.3 megapixels.

If I can perform some miracles with Photoshop, I may post a few more photos in a few weeks.

The prospect of going back to work today almost makes me want to do something stupid and irrational like buy a lottery ticket. Almost.

Pilgrimage to Lambeau Field, Green Bay. Then interesting collection of injured raptors at Bay Beach Wildlife Sanctuary. Back to work.

The Brewers proved solos don't measure up to 3-run shots and lost to Houston 9-6. Ben Sheets looked good just off the DL but lost.

Rain fortunely held off on mile hike back to car. Medium-distant views of soaring hawks. I can see two harriers right now.

Headed to Wisconsin Friday. Watch for text message updates. Photos next week. Of what? I'm not sure yet. Something....

Stuck in Lodi again. Or Kansas City as the case may be. This weekend's primary diversion was a baseball game Saturday night.

The Royals were hosting the Cardinals, but I've already seen the hapless Royals three times this year and will visit St. Louis for two games next month, so I was in the mood for something different. I crossed the state line into KCK to see the Kansas City T-Bones host the Edmonton Cracker Cats in a Northern League game. (The oil industry is important in Edmonton, and cat cracking supposedly is an oil refining process. Who knew?) I was in for a surprise when the Edmonton lineup was announced: "Leading off, number 11, third baseman Stubby Clapp."

That announcement brought back memories of the Scottsdale Scorpions from five years ago. The Cardinals sent two third-base prospects to Scottsdale for the 2000 Arizona Fall League. By June of the following year, both guys were on the big-league roster at different positions. One was Albert Pujols, who quickly blossomed into a power-hitting superstar and at age 25 is already projected to be headed for the Baseball Hall of Fame. The other was Stubby Clapp, who played 23 games with the Cardinals and accumulated five hits in 25 at-bats. That is his only major league experience, but he enjoys cult status as a national hero for his exploits with the Canadian national team. He had a game-winning hit for Canada against the USA in the 1999 Pan Am Games and also played on the 2004 Olympic team. For this and his long minor league career he has been selected to the Windsor Hall of Fame by the Pennysaver shopper in his home town of Windsor, Ontario. It may not be Cooperstown, but I'm not making light of it: The folks in Windsor are proud that he's from there.

This off-season at the age of 32 with the prospect of more time in the big leagues doubtful, he contemplated retirement. Rather than try to find another Triple-A or Double-A assignment, he let former national team teammate Mike Kusiewicz talk him into playing in the Northern League. It is the premier independent league and its teams probably could compete on the field with affiliated Double-A teams, but it's a big step down financially for the players. Total team salaries are capped at $100,000, an average per player of $5,000. As a Canadian national hero, former major leaguer and star of the team, Stubby might get slightly more than the average. (By the way, Pujols is making $11 million this year, which is about $16,000 every time he comes up to bat.)

His given name is Richard, but everyone calls him Stubby. His father and grandfather also were known as Stubby, so he's actually Stubby Clapp III. Even though it's an inherited nickname, at 5-foot-8 the name fits him. In his nine-year minor league career he has more stolen bases (69) than home runs (43) which gives a clue about his style of play. He's a scrapper with a memorable name, and I'll never forget that Arizona autumn when he was competing for playing time with a guy who was younger, bigger, stronger, and more talented. Five years later, Stubby Clapp is still hanging in there. 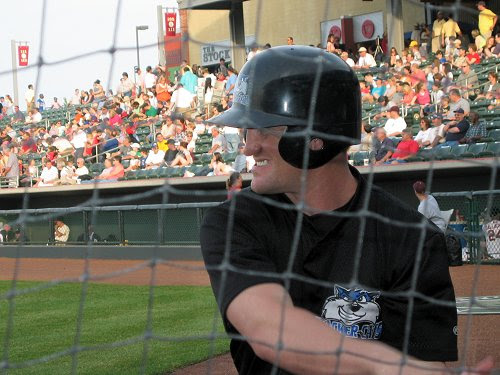 The T-Bones home stadium is CommunityAmerica Ballpark in the western part of Kansas City, Kansas. A local credit union owns the naming rights. I was able to get a seat in the second row right within reach of the visiting on-deck hitter (it was actually hard to see around him at times), so I can attest that the best seats are padded and quite comfortable. For the most part the park appears to be extremely functional rather than fancy. Even though there are only 4,365 seats, crowds of more than 6,000 jammed the park for the first two games of the season Friday and Saturday, with the excess sitting on the big outfield berm. As at many minor league parks, the staff feels compelled to fill every half inning with a wacky contest. However, I think even the promotion-heavy T-Bones don't have a wedding at home plate before every game. The happy couple met at the ballpark and decided it was an appropriate place to get married. 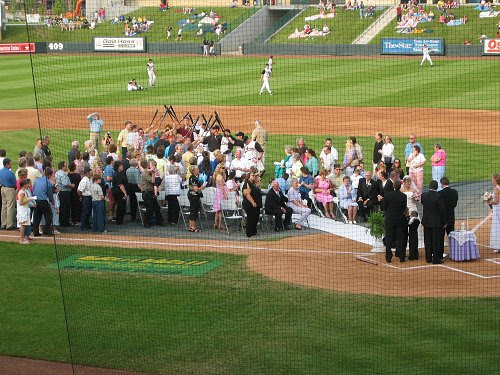 This was my second or third Northern League game, depending on how you count. In 2002 I saw the Sioux Falls Canaries play. Way back in 1971 I saw the Sioux Falls Packers of the Northern League (I must have been quite young), but that was a different league that went out of business after that year. The Packers were a Class A affiliate of the Reds. The current Northern League, the fourth incarnation of the name, began in 1992. As an independent league, there is no affiliation with major league baseball.

If you claim the Red Sox or Cardinals as your team, Northern League baseball might seem kind of pointless. But if your choice for a weekend diversion is between the KCK T-Bones and the KC Royals, why pay major league prices to see the "small market" Royals? There's great stuff over on the Kansas side of the line.