I left my trail camera in Wind Cave National Park in the Black Hills May 27 hoping to get a few shots of elk wandering past. I did get a few during the next few weeks, but on June 12 an elk became very curious and somehow managed not only to knock the camera askew, but rip the end off the cable that attaches the solar panel. For some reason the camera fired off 200 shots of nothing in the next couple days and filled up the memory card. So it's been sitting out there dead for three months but I didn't have a chance to retrieve it until this weekend.

The first image is the best full-frame color shot of the bunch. The second was taken just after midnight with the flash shining off the elk's retinas. You can also see another shining eye below and to the right.

I reset the camera and installed new batteries, but because the solar panel connection is useless for now, the batteries will run out within 10 days. On the way out of the park I saw a batch of nine elk with huge antlers on a distant hillside. Hopefully they'll wander past the trail camera soon. If all else fails I'll go down to Omaha and shoot some zoo elk. (Update: Zilch from battery power.) 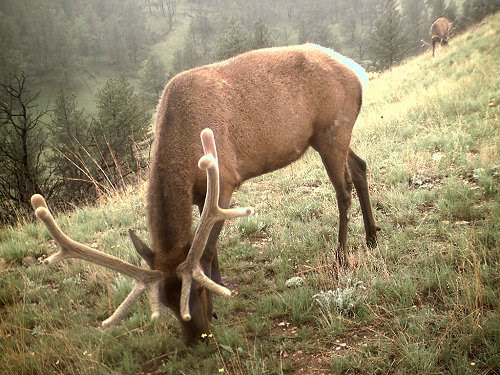 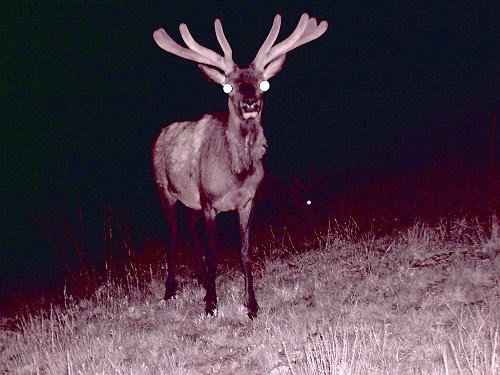