I've been stricken with employment since July and haven't had a chance for much (fun) travel, but I headed to the Black Hills this weekend to see if I could find the bighorn sheep I imaged last year at this time.

It took a while, but Saturday afternoon I eventually found a flock of 16 ewes and four rams in the Game Lodge Campground, Custer State Park. It was starting to snow and the light was fading, but I took snapshots for more than an hour as they grazed. Here's one of a ewe casually steeplechasing (is that a word?) over a four-foot fence that borders the campground. 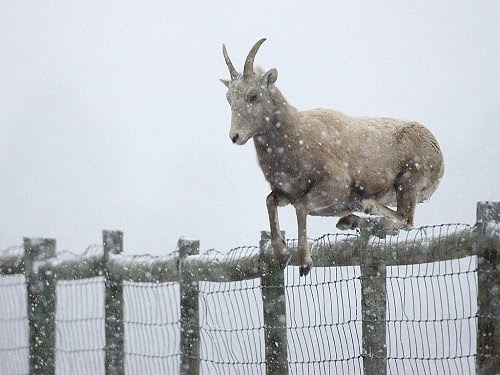 It kept getting snowier and darker, so I decided to pack up. At that moment one of the rams which had wandered off earlier came charging back in and head-butted one of his counterparts with great vigor. I quickly set up my camera again, but of course nothing further developed.