I didn't have a plan for Sunday in New York, so I decided to walk south until I got tired, then take the subway back to the hotel. I didn't expect to cover the 4.5 miles from 50th Street down to Battery Park, but I did.

Along the way I saw a few unusual things, such as a girl with bright pink hair and pink tights, set off with a stylish black cape and long black boots, walking back to her building with breakfast in hand. Quite an ensemble. Most people, even those with pink hair, would just throw on some sweats for a Sunday morning run to the bakery.

There were some other strange and colorful sights along my route. A girl with blue hair (not nearly as stylish). A guy in Battery Park dressed up as Lady Liberty, taking a break from posing with tourists, talking on a cell phone. A guy getting off the subway dressed up as a plastic army man, 100% bright green including his hands and face. (Full body spandex, not paint.) A British police constable riding the Wall Street bull (see below). Then there was the line of TV cameras staked out in front of 71 Broadway. "DSK?" I wondered.

My instincts were correct. The Gothamist reported that residents received the following notice:

"We want to inform you that Dominique Strauss-Kahn, the former IMF Director who is under indictment in New York, is currently staying at 71 Broadway. Mr. Strauss-Kahn is here as a guest of a leaseholder. We were not consulted before the leaseholder invited him in, but we have been assured that he will only be staying here until early next week."

I didn't see DSK out looking for croissants, unless he was dressed as a girl with pink hair. 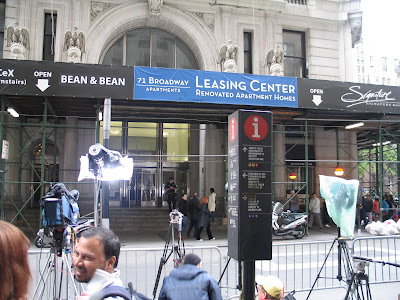 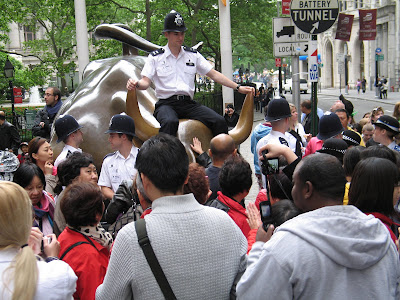