I've gotten into a six-month cycle of April and October for checking my trail camera in Wind Cave National Park. I was eager to see the images this time since there were multiple cameras deployed for the first time. Alas, the cameras didn't capture any usable images past mid-August.

The problem with the two primary cameras, the Reconyx and the new Moultrie, was I followed a hint I read somewhere and set them just a couple feet off the ground. This probably would be fine if I was able to check the cameras every few weeks, but grass grew up in front of them as they sat there for six months. Both cameras took tens of thousands of images of wind-blown grass before the memory card filled up (Reconyx) or the batteries gave out (Moultrie). As for the old Bushnell, it got a few elk shots, but the batteries only last about a month and the image quality leaves a lot to be desired (which is why I've bought two cameras since).

I reset the Reconyx and the Bushnell, but there were some problems with the Moultrie. First, when I came up on it I was surprised to see that the cable lock securing it to the tree was loose. Hmmmm. Second, my key chains did not have the key to open the case, so I couldn't get to the memory card. Third, there was a bit of schmutz on the lens that wasn't easily removed. It was necessary to take the Moultrie home with me to get to the memory card and clean the lens. While reviewing the images it got before the batteries ran out, I discovered why the cable lock was loose. An elk had chewed on it and somehow managed to undo it. See below! I have to say my faith in Master Python cable locks has been shaken. The jostling turned the camera by about 20 degrees, so most of the Moultrie images are tilted. The Moultrie has new batteries and a clean lens, so now I'm trying to decide whether to drive out to the Black Hills in a few weeks to re-deploy it. By the way, this is the second time an elk has tried to eat my trail camera. Several years ago, one chewed up a solar panel connection on my old Bushnell.

Despite these trevails, I got some interesting images of elk, coyotes, and even a turkey. I have created an October 2014 gallery which also includes SLR shots of an elk, a bighorn ewe, Devil's Tower, and (for something completely different) a partial eclipse of the sun. Click on an image to get into the slide show. 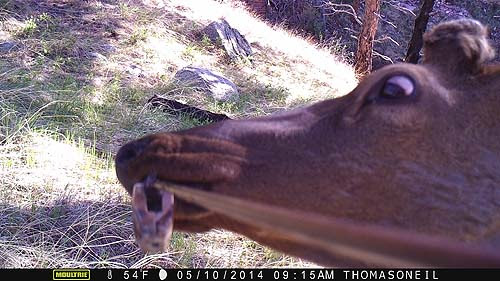 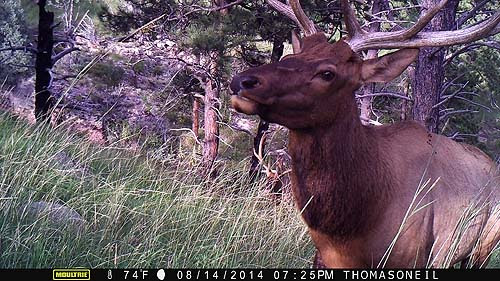