Elk and Parks, and a few Olympians

Tame Elk: The Omaha Zoo has a wildlife park west of the city, the Lee G. Simmons Conservation Park and Wildlife Safari, which features North American animals including elk, bison, bears, wolves, raptors, and other birds. For me, the highlight is the elk, which are huge and very easy to photograph in their drive-through enclosure. I previously visited the park in 2008.

National Park Landscapes: I never claimed to be a landscape photographer, and only posted a few images from the parks that don't have wildlife in them. But I think one image from Bryce Canyon is more than just the usual snapshot.

Olympic Skiers: We happened to hit Park City while the aerial skiers were practicing. They jump off a ramp to do their twisting routines, then land in a pool. I snapped a bunch of images.

Wild Elk: Even though I can easily get images of huge placid elk near Omaha, I still like to stalk the wild elk in the Black Hills. During the recent six-month period I had three trailcams deployed in Wind Cave National Park. The Reconyx got a few decent images in the location where it has been for the past four years, but the best shots were on the Moultrie located a few hundred feet further south. The new Primos camera takes a decent image, but is far too sensitive. It fired off more than 60,000 shots in a month before the batteries died, and so far I've only found a handful that were anything other than wind-blown grass. I took the Primos out of service while I figure out how to work around the problem. I did post one image from the Primos. Because it was mounted on the same tree as the Moultrie, they both captured a shot of a cow elk at about the same time. One problem I have with trailcam JPGs is adjusting the color to look natural in various lighting conditions. The images from the two cameras illustrate this problem.

Badlands Bighorn: We knew from a previous side trip to the Badlands that there are a few bighorns in the park. We were not disappointed as we saw a bighorn working his way down steep cliffs from a peak to the vegetation below. I posted 25 images just of that sequence, because I can. Click on any of the images below to start the 87-image slide show. 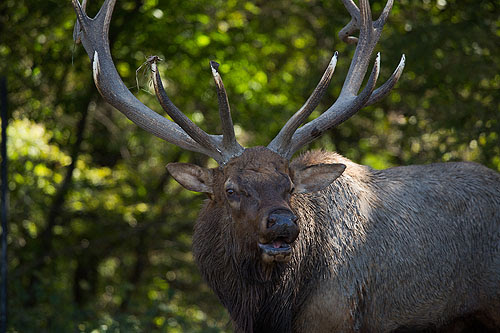 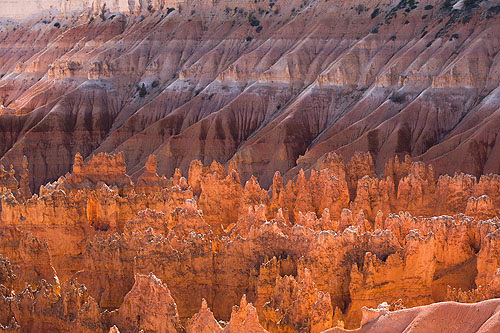 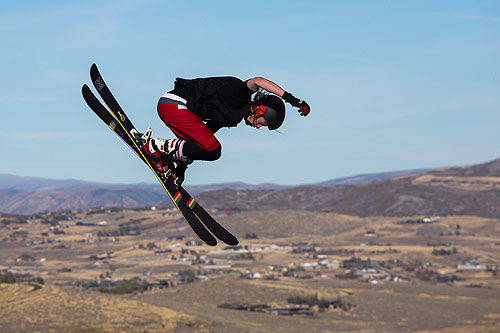 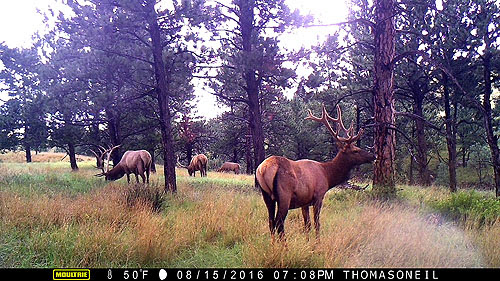 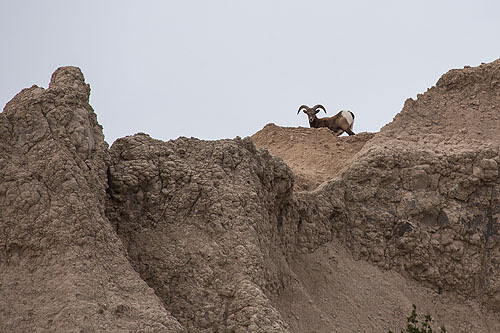