I've been planning to see the Aug. 21, 2017 total eclipse since at least 2003 when I saw an annular eclipse in Iceland. I was planning to stay overnight in Columbus, NE and drive either south or west to the zone of totality. However, the cloud situation over Nebraska looked iffy so I switched at the last minute to overnighting in Custer and driving down through Lusk to Jay Em, WY.

I was not disappointed in Jay Em. Skies were clear except some irrelevant haze on the horizon. Of course, since it was Wyoming, there was a stiff wind. I staked out a spot just south of town along US 85 about an hour before the partial phase started, and leading up to the event all I could hear was the wind and the traffic. As the eclipse progressed and the light dimmed, the wind also began to abate. Coincidence, I don't know. When totality began, I could hear the people in town for the first time as the cheers went up. After taking my totality pictures, I made sure to leave a few seconds just to look around at the landscape and the sky. I noticed a few stars and an extremely bright spot to the right of the sun that I later learned was Venus. Duh, should have known that. I included some technical details on the images that some may find interesting. With the totality shots, different shutter speeds revealed different details.

Not to bury the lead, the image below is the best of the bunch. It shows three prominences rising from the surface of the sun at 12:00, 1:00 and 3:00. Click on the image to start the slide show of larger images at the beginning. 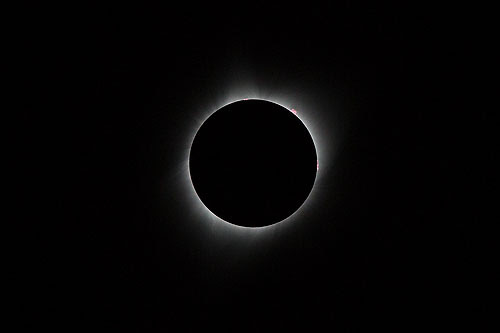 Prominences on the Sun

Depending on your monitor, you may notice that the filtered shots have a totally black background while the unfiltered totality shots have a lot of "noise" in them. The filtered shots were processed in Photoshop with all the adjustments I usually make for levels, contrast, color saturation and sharpening. I chose to present the first three totality images "as is" with no processing. A lot of the eclipse pictures you see are composites or manipulated in some way. But often there is a legitimate reason to invoke Photoshop, so the fourth totality image in the slide show has been cropped and processed a bit to emphasize the prominences.

With wildlife photography, I have equipment that professionals would use, I have a certain amount of technical proficiency with it, and I have the patience and inclination to look for the animals. I'm not much of an astrophotographer because it usually requires fumbling around in the dark long after everyone else has gone to bed, I don't really see that well at night, and even low-level equipment is fairly expensive. High-end equipment costs millions or billions of dollars and requires either a plot of land in the Chilean Andes or a launch vehicle. So I don't go after planets, stars or other distant objects, but the sun and moon are easy enough to do with what I have, and often can be done during the day. Here are some sun/moon events that I have photographed with varying degrees of success over the years. Unfortunately there are no more Venus transits until 2117 but there are other things coming up. The next major event is a transit of Mercury Nov. 11, 2019. It will be visible from my house and will be in progress at dawn, so I should be able to get some better images than 2016 assuming clear skies. After that there is an annular "Ring of Fire" eclipse Oct. 14, 2023 (I plan to be in Albuquerque) and a total eclipse Apr. 8, 2024 (I probably will be near Austin, TX).