Since I drove through the Black Hills on the eclipse trip, I took care of my three trail cameras. Camera #1, the Reconyx, is in a new location for the first time in five years, a few hundred yards to the south of its former location. I posted six of the better images in the slide show, including the one below of an elk getting up close and personal. The strap on Camera #2, the Moultrie, was rotting away so I had to put it on a smaller tree last April. I fitted it with a new strap yesterday and was able to move it to a larger tree in what I hope is a better location. I got some images in the four months since last check but nothing worth posting.

Camera #3, the Primos, is officially a disappointment and will be relegated to taking pictures of bunnies under my deck. When it worked properly, image quality was actually decent although a bit oversharpened. But it rarely worked properly. Almost all daytime images were extremely overexposed, and even the usable ones required more adjustment than those from the other cameras. Nighttime images were better but still not great. Although I included five images from #3 in the slide show, I'm tired of it being an Odell Beckham drama queen. (It's an NFL reference.) I'm in the market for a new trailcam #3 and probably will go with a Bushnell. The Reconyx has been very reliable, but it costs 3x what other trailcams cost. Bushnell seems to be the best option now in my target price range.

On the way home I wanted to follow up on my burrowing owls quest in May. I just discovered I never actually posted any images from that quest. So to finish off the slide show are an image from May shot at a location south of Pierre west of the river, and a more distant shot from today at a location east of the river. Burrowing owls are my current white whale and I'm trying to figure out what to do about it. I'm thinking about planting a trailcam at another location south of Pierre I found today. I didn't get any DSLR photos there but I'm thinking there may be some trailcam potential.

Click on the image to start the slide show. 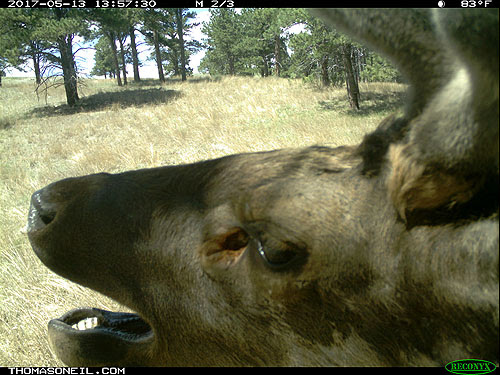 Elk getting too close