The two places I usually go to see wintering bald eagles are different. At Loess Bluffs along the Missouri, the eagles chase migrating geese and feed off stragglers. At the dams along the Mississippi, the eagles catch fish. I did Loess Bluffs a few weeks ago, and this week I did the dams near Burlington and Keokuk, Iowa. When the upper Mississippi freezes, the eagles congregate around the open water below the dams. Except for the overcast skies which resulted in some gray photo backgrounds, conditions were ideal to see hundreds of eagles at both dams.

I posted lots of photos, because I can, 54 in all. I want to point out a couple of sequences. The first one is about halfway through the slide show. I was getting a bit discouraged at Burlington (actually Gladstone, Illinois) because the eagles were fishing far from shore, but then a juvenile came to the edge of the ice nearest me and on its second try managed to catch a small fish. The second sequence near the end of the slide show was in Keokuk where an eagle perched on a shoreline tree near me with a big fish. After taking a few bites, the fish slipped out of its grasp and fell in the water. I thought maybe the eagle might go down and retrieve it, but apparently that was too much bother and it flew away.

Click here to start the slide show at the beginning, or click on one of the images below to start one of the sequences, or the link at the bottom to see the short video. 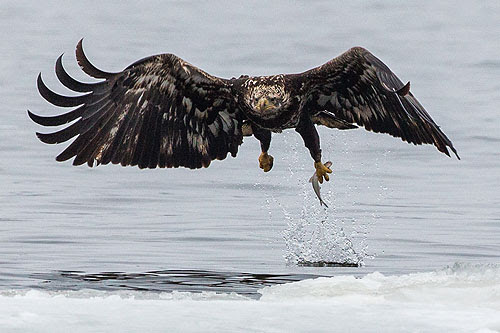 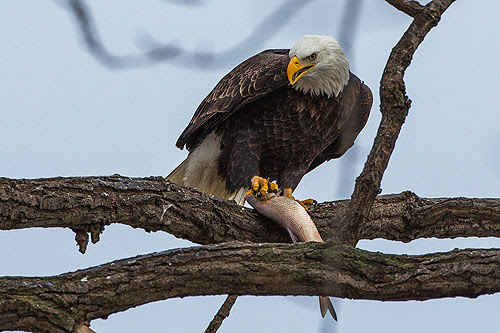 Despite my preference for still photography, it is hard to convey how many eagles there are at the dams when conditions are right. I posted a 20-second video on YouTube showing the eagles buzzing around below the dam at Burlington.

Technical camera stuff: I didn't use the Canon M100 mirrorless a lot, but the first two images in the slide show are of a pair of eagles roosting, one taken with the M100 and one with the 5D Mark III, both with the 500mm lens. I would rate image quality the same. There is a slight difference in brightness that I haven't bothered to fix. The M100 does well on a long lens with static subjects, but forget about using it with any sort of action shot. As I have said before, for that you need a camera with a real viewfinder such as the 5D.

After five years of owning the 5D, I found out about a technical quirk regarding storage card selection and burst shooting. The camera takes both CF and SD cards, and for five years I shot primarily with the SD card. Bursts were limited to about 8 shots, then the buffer had to clear. It turns out that the camera buffer will clear much more quickly with a fast CF card and no SD card, so I bought a Sandisk Extreme Pro CF rated 10 times faster than my old CF card. The fishing sequence, of which I posted 13 images, was actually 19 images in 15 seconds. Obviously that is not continuous shooting as the 5D is rated for 6 frames per second. However, based on previous experience, in a sequence like that there was a danger of the buffer filling up and taking a few seconds to clear, causing me to miss the key sequence culminating in the 10th image shown above. I took some other bursts and never felt any lag, but with freedom comes responsibility. I fired off 830 shots in 24 hours which is a lot to go through.

The overcast skies were troublesome for flight shots, so from 2014 here's what a Mississippi River eagle looks like with a big fish and a blue sky: 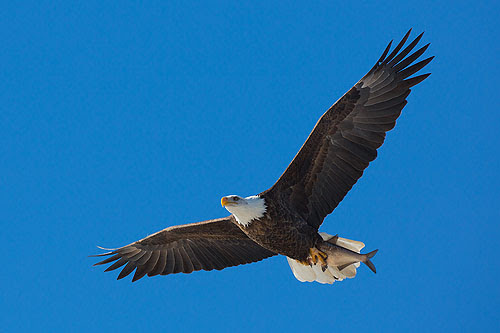 Bald eagle with fish from 2014