For the eighth December since 2005, I went to Loess Bluffs National Wildlife Refuge (former Squaw Creek NWR) in northwest Missouri to see eagles and geese. Unlike last year there weren't so many geese this time, but there were lots of eagles. I also saw something I hadn't seen there before, bald eagles actively building a nest.

I got there Wednesday afternoon and it was already getting overcast by the time I found the nest. There are a couple of nests on the western side of the driving loop, but this one was on the southeastern part of the loop. I expertly located it by spotting a bunch of cars stopped along the side of the road and slowing down to see what they were looking at. It was overcast late Wednesday and the light wasn't great, but the slide show includes some interesting nestbuilding shots. Thursday morning it cleared off, but the eagles weren't back working on the nest until 11:40 a.m. I took advantage of the better light and shot snapshots for about 40 minutes until the pair flew off to do something else.

According to the official count, the number of geese peaked a couple weeks ago. In my expert opinion, the geese have already moved on because the ponds have mostly frozen over already. Officially, the eagle count peaked at 198 on Nov. 27 and dipped to 95 on Dec. 4. I easily spotted 50 without really trying. The eagles out on the ice shadowing what waterfowl remained were generally too far away to photograph (although there is one in the slide show), so most of the images are in the trees. Click on images to start slide show of 47 images. 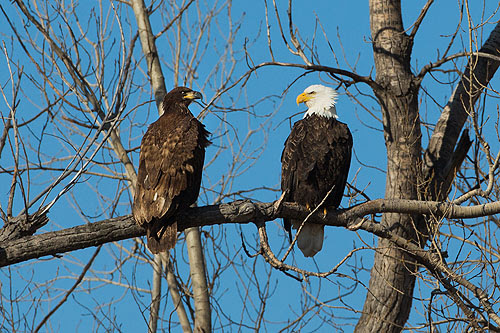 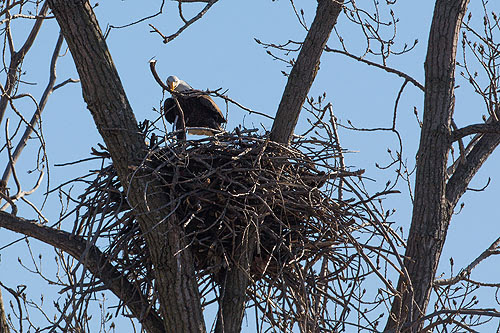 The refuge had its Eagle Days the previous weekend. I generally try to avoid these events because seeing more people than eagles is not the reason I go to these places. But if you want to become more educated about eagles and how to find them, lots of places near where eagles congregate in winter have such events.