I've made the Black Hills and Badlands photo trip several dozen times since my move back to the Heartland 12 years ago and have accumulated hundreds of bison, pronghorn and bighorn images. There's always the hope that I'll see and capture some behavior I haven't seen before, and this trip didn't disappoint.

When we passed through the Custer State Park in mid-April, there were no baby bison present. According to news reports, they started popping out just after we left. When I returned solo on Friday, there were baby bison everywhere. I was staking out a large herd in the south part of the park and saw this baby, no more than four weeks old, decide to jump over a small creek rather than wade through it. Baby bison really can fly! 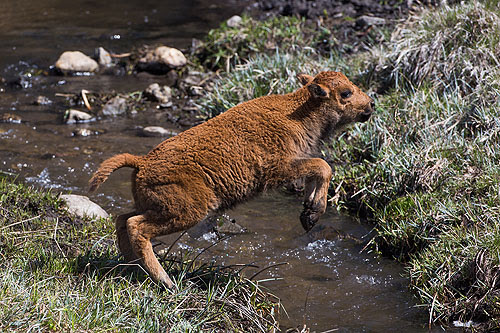 Something else I hadn't seen before was pronghorns chasing each other. Next to Oak Draw Road, I saw a small herd of six, and I think the old buck was chasing the youngsters around to keep them in line. Compared to the youngsters he seemed to move rather stiffly when walking, but he could still run. Pronghorns are considered the second-fastest land animal in the world after cheetahs, and it is something to see them race across the prairie at speed. 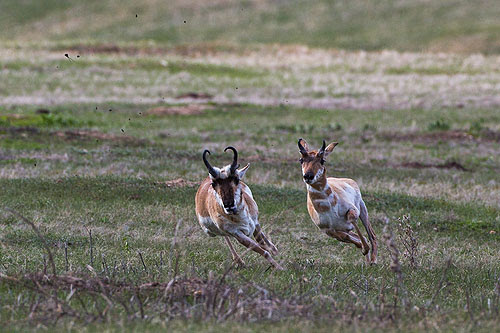 I stopped in the Badlands both Thursday and Saturday expecting to see bighorns, and as usual a herd was in the vicinity of Pinnacles Overlook. There was only one small ram with the ewes. Several of them with lambs were on the cliffs above the nearby Ancient Hunters Overlook and I got some images both Thursday and Saturday. The lambs blend into the cliffs and it was hard to see them, but I was able to tell there were three of them climbing around on the steep hillside. The Sage Creek Rim Road was finally open on Saturday after being closed the last few times I've been in the park, but I did not any of the four rams that frequented the area the past few years. 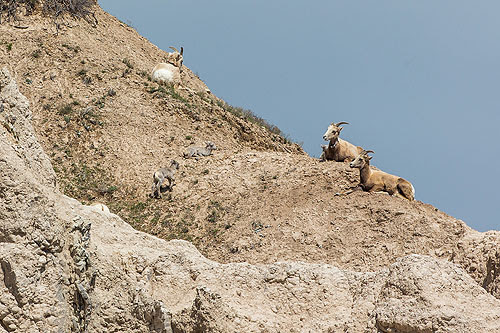 Click on the image below to start the slideshow of 60 images at the beginning. Besides bison, pronghorn and bighorns you'll see prairie dogs, elk, deer, mountain bluebirds, swallows, and some other little birds. Alas, no coyotes. 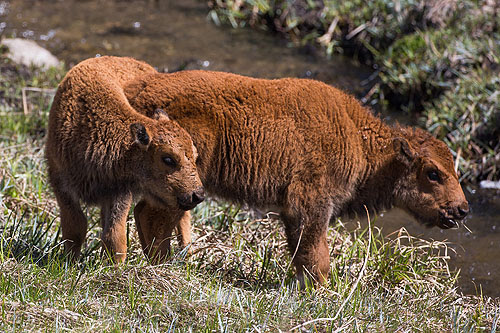 Update 5/26/19: Geese and ducks are so common I rarely bother to shoot them, but I decided today to head to the neighborhood pond, the site of my first Canon M100 test two years ago. I got three images worth posting but it was a reminder that a mirrorless camera without a viewfinder is not a wildlife camera. The image shown below is two ducks on what I believe is a muskrat hut. I got a few blurry images (not posted) of a muskrat (?) swimming toward me. He submerged near the shore and I never saw him come up again. Not only is it hard to frame a moving subject, it is hard to get correct autofocus with a long lens, even with a stationary subject. I missed my tripod and real DSLR 0.8 miles away; maybe this week if it stops raining. Click on the image to start the slide show at that point, then it wraps around to the images from out West earlier in the month. 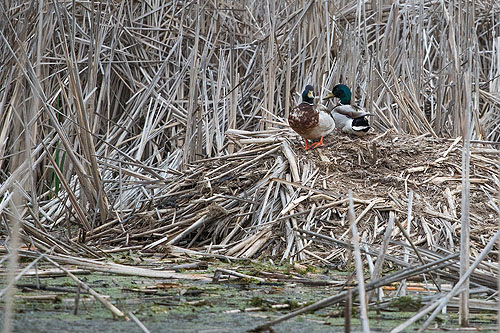