This is the third installment this week in my "old images revival." This time the setting is Blackwater National Wildlife Refuge near Cambridge, Maryland in April 2003. There were lots of osprey in the area but it seemed I would have to be content with distant shots. Until...I was walking along a trail and heard a crash in the tree above me. An osprey had landed with a huge fish that was still flopping around. I carefully got in position to shoot up at it, and fired off 85 images in 10 minutes.

The lighting conditions were difficult. It would have been much better if the sky had been blue and I had a flash unit for fill flash, but what I recorded was a low-contrast bird with a washed-out, cloudy background. At the time, I posted a couple of images with which I was never really satisfied. I took another crack at the images today with my more modern version of Photoshop Elements and another 16 years of experience with photo editing. There are still the limitations of the original images, but I think what I came up with is more presentable. I ended up posting two revised images and eight new ones. Click on the image to start the revised slide show. 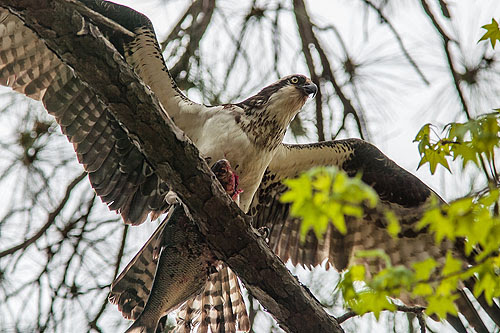 Osprey with a fish