The Sioux Falls Air Show was over the weekend featuring the USAF Thunderbirds. Including Friday's practice, I had three chances to track the Thunderbirds through their routine.

While there may be some value in being on the flight line at the airport, I camped out on a hill a mile or so from the airport and waited for the planes to fly over. I missed out on the static displays and some of the other performers, but I avoided the crowds and the Thunderbirds flew right over my position several times during each show.

The other highlights of the show were the old warbirds. I didn't get great photos of the Corsair, P-51, and TBM Avenger, but I did post a couple images of the latter two. (I got much better warbirds shots at the 2016 Sioux Falls Air Show.) I had more success with the Heritage Flight, which this year featured Navy planes including the AD-4 Skyraider, FJ-4B Fury, and F/A-18G Hornet. The Skyraider and Fury were Vietnam-era ground attack planes, one being prop-driven and the other being a jet. The Fury is related to the Air Force's F-86 Sabre. The Hornet is a version of the same plane used by the Blue Angels. Another Hornet at the show was a CF-18 Canadian version, which did solo shows before the Thunderbirds. It was reported that this was the only appearance by the RCAF at a US air show this year. It seemed like five minutes after finishing its performance, it took off again and headed back to the Great White North.

By my count this is the 11th air show I've photographed since 2002, the third with the Thunderbirds. The last time I saw the Thunderbirds was back in 2005 at their home base in Nevada. That was a gigantic show. Click here to see the air show listing on my Galleries page.

I posted 63 images, including 47 of the Thunderbirds. The light was constantly changing during the three days, so at times it was challenging. The Thunderbirds images are roughly in chronological order, but with single planes first, then formations of four, five and six. Click on the images to start the slide show. 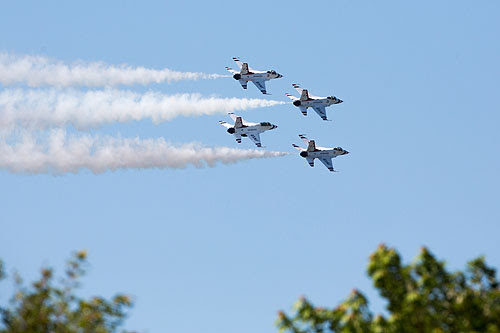 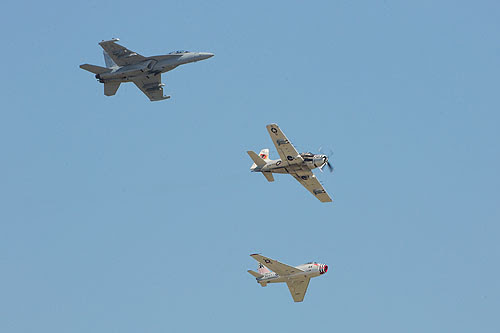