My first photo expedition to Northwest Missouri was in 2005. The wildlife refuge near Mound City used to be called Squaw Creek, now it goes by the bland PC name Loess Bluffs, but the attractions are still the same – eagles and snow geese. The geese start coming in November with the eagles following, and I have found the first week in December is usually the best time to see some of each.

There is a public event at the refuge this weekend, Eagle Days. There are many eagle events located throughout the country this time of year, and I encourage everyone to find one in your area and check it out. But you won't see me because I want to see eagles, not a bunch of people clogging the road. My advice is to avoid the crowds and hit the location of your local event the week before.

Unlike some recent quick trips to Loess Bluffs, I had all day Tuesday and half of Wednesday to hunker down and wait for things to happen. This worked well on Tuesday with the eagles, but the only snow geese I saw were high in the sky, on their way elsewhere. There are two eagle nests, one on the west side and a newer one to the southeast. Unlike last year, there didn't seem to be any construction going on, but there were eagles hanging out at both locations. I have one image of an eagle in the west nest, but it just seemed to be resting there momentarily. Prominently present in the pools were hundreds of trumpeter swans, a formerly-endangered species. On the way out at the end of the day, I came across a large, scary cloud of red-winged blackbirds.

Wednesday, a big flock of snow geese did come down to earth, but in a location I don't usually see them. They were in the Pintail Pool on the west side rather than the Eagle Pool to the southeast near the main entrance. I waited around for a while, but finally they did the big cloud thing. I snapped some final pics then headed home just before noon.

I took a few videos with my SLR, and caught about 30 seconds of an eagle screeching. There is some wind noise, but I thought it was worth posting. See this YouTube Video.

Click on one of the images to start the slide show of 37 images. 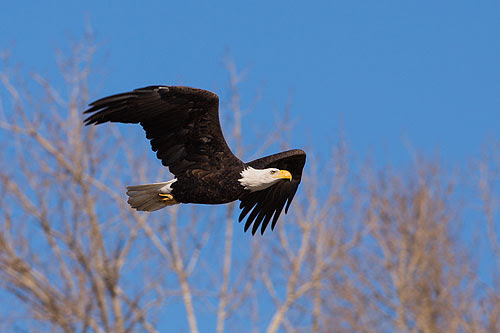 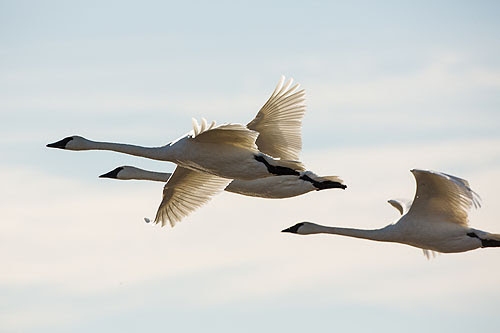