Digital images fill up a computer hard drive quite quickly, so at some point I have to declare a project completed and clean up the mess. I just went through my eagle photos from last month for a final time and deleted all the blurry ones before backing up to DVD. But I also came across a few more worth posting. I previously posted another image from the same sequence as this photo, but I think this one is now my new favorite for this project. This link goes to the slide show, starting with five new eagle images and continuing on with images previously posted. 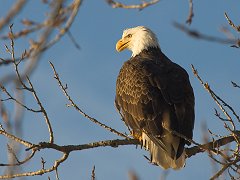 On a somewhat related matter, I've come to the conclusion that doing video correctly requires a lot of effort. No wonder when the credits roll at the end of a TV production there are dozens of names. I took some video of the eagles but haven't even viewed it yet. I took almost an hour of video in the Galapagos in December. I'm going to keep the tape as a memento but most of the video is too shaky to put together something for public consumption. Video is kind of fun, but in the context of what I'm posting here it's just the occasional supplement.

The past three springs, a pair of red-tailed hawks raised a total of four chicks in a nest just a few yards from the office building where I work in Braintree, Mass. Views from the third and fourth floors resulted in a few decent photos and a video. The hawks have been flying around the neighborhood the past few days, but the twigs they are gathering are not to renovate the old nest. The hawks are moving on up. 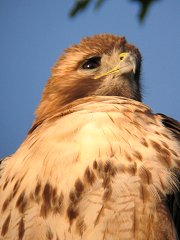 The new nest is still visible from the office window, but it's further away across the street. I think there still will be photo ops, but they will be different than last year. Digiscoping might be the way to go this year. This photo is a digiscope (Televue 85 telescope and Canon S330 digital camera) of one of last year's chicks, and I think it was roosted in the tree which is the site of the new nest. I got the necessary attachments for my S45, so that's my digiscoping camera this year.

Toward the end of last year's nesting, it looked there were a lot of bugs flying around the old nest, and the evergreen tree had started to turn yellow from all of the guano. Perhaps the hawks escape some of the bugs by moving, and there's no doubt that the old tree is greener than it was eight months ago. It won't be quite the same, but I suppose it is progress.