I don't know whether Dick McPherson had weekly press conferences when he was head coach of the Patriots. I do know when Bill Parcells succeeded McPherson in 1993, his sessions with the press immediately became appointment radio. Each week we wondered how long the Boston Globe's Ron Borges could poke The Tuna with a stick before the coach lashed back with "That's a STUPID question!"

Thirteen years later, Parcells is still battling it out with the press, and the reporters do their part by continuing to poke him with sticks. Yesterday's scheduled press conference with the head coach of the Dallas Cowboys happened to come the day after the most bizarre incident yet involving The Player, and The Tuna responded with a slightly subpar performance capped off with a flashy dismount. He tried to get though the media frenzy by giving evasive non-answers, but after nine minutes of inane, repetitive questions he finally ending it the way he should have ended it much earlier.

"When I find out what the hell is going on, you will know," The Tuna snapped as he set sail for the exit. "Until then, I am not getting interrogated for no reason."

While I was driving home last night, one of the update guys on ESPN Radio came up with the following: "TO's status for this weekend's game at Tennessee has been updated from 'Suicidal' to 'Probable.'" I started laughing so hard that I nearly drove off the road.

I felt a twinge of shame for laughing at such a tasteless and gratuitous remark, and my sense of revulsion apparently is quite a bit higher than all the folks who helped Jackass II top the box office charts last week. But I'm not going to apologize for celebrating a good Tuna Tirade. Tuna, please never change.

"Allerca has produced the world's first scientifically-proven hypoallergenic cats," the company has announced. "The cat allergen is a potent protein secreted by the cat’s skin and salivary glands. Allerca has focused on naturally occurring genetic divergences (GD) already present in cats that do no harm to the cats in any way."

In other words they use selective breeding to eliminate the undesireable trait. This brings to mind so-called Frankenfood such as genetically-engineered corn which liberal weenies think will lead to the end of civilization. (I belong to several liberal weenie organizations. It's a term of endearment.) Of course Allerca claims that selective breeding is different from genetic engineering, so is perfectly natural and safe.

What about thoroughbred horses? 95% of all thoroughbreds can be traced back to one stallion born in 1700. In New Scientist, Matthew Binns of the Royal Veterinary College in London says many negative traits are associated with inbreeding in the diminutive gene pool. "The selections we've made for fantastic beasts have had some detrimental consequences."

One tenth of thoroughbreds suffer orthopaedic problems and fractures, 10% have low fertility, 5% have abnormally small hearts and the majority suffer bleeding in the lungs, says Binns. His solution? Even more selective breeding to get rid of the negative traits. Even if it's not considered to be genetic engineering, I think it is alarming.

Ask yourself a simple question: What if we were talking about selectively breening humans instead of cats or horses? I'm sure the name of Nazi Dr. Josef Mengele would come up during that discussion. Let's just say NO to creey GE Frankencats!

Actually, the truth is I don't care about how cats and horses are bred. I just don't like irresponsible cat owners. Every once in a while I see one of their little killers lurking under my bird feeder. I read something in the Milwaukee newspaper a few years ago that supposedly-domesticated cats kill millions of birds each year – just in the state of Wisconsin. In my opinion, all domestic cats that kill wild birds are Frankencats, and anything that encourages more people to own cats is bad, in my opinion.

Seven is less than Six

I've had a Canon G6 digital camera since last year and have been generally happy with it. The lens is a fast f2.0-3.0, the rotating LCD lets me take photos at odd angles, and the available RAW file format gives me some latitude when working with my photos in Adobe Photoshop CS.

Canon has discontinued the G6 and replaced it with the G7. You would assume a new camera would be better than the one it is replacing, wouldn't you? Unfortunately Canon has decided to release a decidedly degraded model for reasons that I am unable to fathom.

The lens is a slower f2.8-f4.8. There is no rotating LCD. There is no RAW mode. DPReview.com's Phil Askey speculates that RAW mode "appears to have been completely dropped by Canon for its compact models - presumably to protect the sales of entry-level digital SLRs."

In that case, I'm going to have to completely drop Canon from consideration when it comes time to replace the G6. Hopefully that won't be for a couple of years. By then perhaps Panasonic will have its Lumix line perfected and I can get one of those.

Why is RAW mode important? The tonal variation in this G6 image from Ireland would have been impossible without it. If this shot had been taken with JPG, the sky would have been a washed-out blob with no detail. RAW preserves more information than JPG. 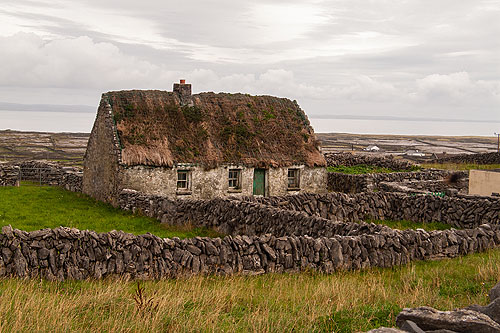 I sent the following email to Canon:

I just wanted to say how incredibly disappointed I am in the announcement of the G7 camera. In many significant ways it is inferior to the G6, which I currently own. In particular, I will not purchase a camera that does not have RAW mode. I'm also baffled by the slower lens and lack of a rotating screen. If you are crippling your Powershots to protect your low-end DSLRs, in my opinion it is a short-sighted and idiotic mistake. I currently own a Canon 1D Mark II, and the G6 is a SUPPLEMENT to the DSLR. I also own a Canon S45, and I was disappointed when the successor S80 came out without RAW mode. In the past eight years I have bought seven Canon cameras to the exclusion of all other brands, but I am dismayed by the crippling of your recent Powershot models and will have no choice but to consider other brands when the time comes to replace the G6.

Thank you for contacting Canon product support. We value you as a Canon customer and appreciate the opportunity to assist you. Your comments are noted and will be passed along to the appropriate party. Thank you for taking the time to write. Please feel free to contact us again if you have any other questions or concerns. Thank you for choosing Canon.

Well that certainly clears things up! Thanks for taking the time to send me a form letter. I'm still going to buy Canon DSLR equipment for the foreseeable future, but it looks as though my last Powershot is the G6. I've got to get out of the habit of dropping it so it will last forever.