Surprise of the Cactus League

The Rangers and Royals moved into their spring training facility in Surprise, Arizona in 2003, but I didn't have a chance to see the new ballpark until this year. I have made it to spring training each of the last seven years, but in 2003 and 2004 I was only able to make quick trips to Florida to see the Red Sox for a few games. This year my schedule allowed a trip back to Arizona. 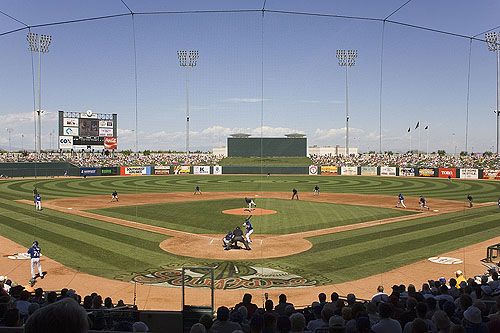 In between a side trip to Bosque del Apache National Wildlife Refuge in New Mexico and some family activities, I took in three spring games, all at Surprise Stadium. One was hosted by the Rangers (A's) and two were hosted by the Royals (Cubs and Mariners). There was bad pitching and plenty of errors, and stars such as Nomar and Ichiro happened to sit out on the days I saw their teams. The biggest star on the Rangers may be Mark Teixeira, and I witnessed him get hit by a pitch in his first at-bat and soon leave the game. The Royals can offer no greater star than Mike Sweeney, a capable guy but not someone headed for Cooperstown. With little on the field providing a distraction, I had plenty of time to form some thoughts about the facility itself.

The Renaissance of ballpark construction began about 15 years ago with Camden Yards in Baltimore. Ever since then, ugly '70's concrete multi-purpose stadiums have been blow up and ballparks with modern comforts but an old-time look-and-feel have replaced them. The builders of Surprise Stadium incorporated what has been learned in recent years into the new facility. For example, there's a second deck, so fans up there are closer to the action than they would be if the seating was not decked. Overall the seating and concession areas are very good. Many spring training stadiums have outfield lawns, but I can't recall that anyone has a bigger lawn than what Surprise has.

The good news about the parking is it is free. The bad news is the access to the facility seems to have been an afterthought. Perhaps there will be further development of the roads, but I just didn't like the way the parking areas are arranged along a single street. With a stadium full of Cub fanatics who didn't leave early, it was a bit of a chore getting out of there. With smaller and less persistent crowds at the other two games, it wasn't quite as bad. But I wonder why they seem to have paid less attention to this detail at Surprise than they did at Peoria and Tucson Electric.

Ticket scalpers hoped for another bonanza as the Red Sox hosted the Yankees in a spring training game in Ft. Myers yesterday. Reports are the entrepreneurs were disappointed as the Yankees left most of their stars at home in Tampa to play a split squad game against Cleveland. Ironically, Jason Giambi and the Yankee scrubs bombed the Red Sox 9-2, while the Yankee stars got three-hit by the Indians in a 3-1 loss.

It was different last year as all of the big names came to Ft. Myers for the only meeting of the spring between the two teams. Scalpers supposedly got $500 per ticket for that game. It was the first chance Sox fans had to boo A-Rod in a Yankee uniform. Not only were Jeter and Posada there, but old-timers like Reggie and Yogi were there. I have a snapshot of Yogi standing by the batting cage pinned to the bulletin board over my desk. I don't like the Yankees, but everyone loves Yogi. I only saw one major league game in 2004, and that spring training game was it.

From 1999-2002, I made it to the Cactus League in Arizona. In 2003 and 2004, I squeezed in weekend trips to Florida to see the Grapefruit League, specifically the Red Sox. This year it's back to Arizona, and I'll take in a few games.