It's the time of year for charity, which I suppose is why nine college football teams with 6-6 records got invited to bowl games. It's also time for the Photo of the Year. As usual, I'm the only one allowed to enter and the prize is an all-expense paid trip to Keokuk, Iowa to chase eagles, which I will be doing next month.

Previous POY have something in common; they are all of birds. If the circumstances were somewhat different I might have broken that tendency with a good bighorn sheep image, but I don't have one that tops the Great Horned Owl fledgling and mother that I snapped at Honeymoon Island State Park in Florida back in March. 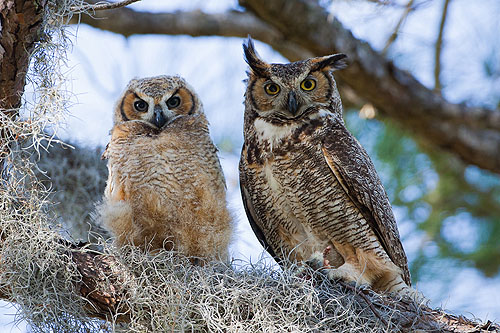 When I was a youth in Rapid City, SD, one of our family's favorite stops was Cleghorn State Fish Hatchery to see the huge trout in the ponds there. But I don't recall a herd of bighorn sheep wandering the grounds.

There was a blurb in the Sioux Falls Sunday paper warning motorists to watch out for bighorns along the highway near the fish hatchery. I left Tuesday and drove the 350 miles west to see what there was to see. The bighorns weren't hard to find as six rams and two ewes were grazing on the grounds and across the highway on a steep hill.

I stopped again Wednesday morning and the count was up to eight rams and four ewes. Then I drove on to Custer State Park and found nine bighorns (two rams and seven ewes) grazing on the visitor center lawn.

In the first image, the curling lips behaviour these two Cleghorn rams are showing is indicative of the rutting season. The second image shows the two Custer rams in the snow. Click on images for larger version. I added several dozen photos from November and December to my Autumn 2008 gallery. 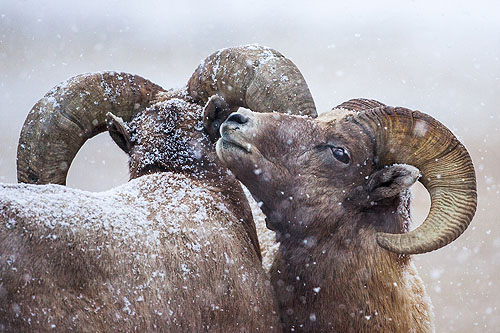