For the second straight year I spent the 4th of July in Red Lodge, MT with family. This visit gave me the chance to finally see what my Browning trailcam captured in the past year.

The rodeo in Red Lodge is preceded each of the three days by a parade, but the biggest parade is always on the 4th. Appreciation goes out to Dunham Real Estate, Whispering Pines, and Aspen Ridge Ranch for their hospitality during the parade and other activities during the week. Click on any of the images below to start the 45-image slide show.

Last year I shot the fireworks with my Canon S95 on a pop bottle tripod on a deck post and had "artistic" motion squiggles in the images. This year I used my newer Canon M100 on a sturdy tripod on solid ground and for the most part eliminated the squiggles. My triggering method was a two-second delay after pressing the button, so I think only one image showed the slightest camera shake. Maybe next year I will break down and use my DSLR with a cable release. 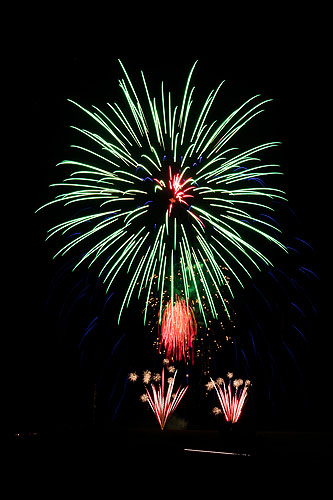 The highlight of the trailcam images was the bull moose that strolled past on Nov. 1, 2017 in the snow. There also were moose images later on of a female and a young one, although not together. There was one elk and a number of deer. For more on my trailcams and where they are currently deployed, see "Tom's Trailcam Central."