(Originally posted on Squeezebunt.com in 1999. Seeing Pedro in 1999 was seeing one of the all-time greats.)

I hadn't planned another trip to Fenway Park this year but the opportunity arose to see Red Sox ace Pedro Martinez in the last regular-season home game on Sept. 27. In April I saw Martinez strike out 10 and beat the Indians 3-2, supported by the hitting of Jason Varitek. It was deja vu all over again as Varitek homered and drove in three runs, while Martinez whiffed 12 and knocked down the Orioles (literally) 5-3 for his 23rd victory of the season. 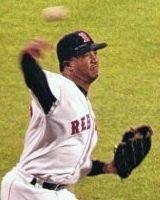 The game was almost marred when Brady Anderson allegedly threw an elbow at Pedro while crossing the plate on a passed ball. Anderson had gotten hit in the back by a fastball a few innings earlier. He leads the league in getting hit by pitches, and the Red Sox were retaliating because earlier in the series Anderson deliberately leaned his knee into a Tim Wakefield knuckleball. At least, that's how the story goes. Whether true or not, this is the kind of allegation that violates some unwritten law. "You try to get hit by a 57-mph knuckler, how about this 95-mph fastball?"

I've seen the replay a couple times and still haven't seen the phantom elbow, but words were exchanged and the benches emptied. Perhaps the hockey fans in attendance were hoping to see a brawl erupt, but most Red Sox fans were hoping that the first priority would be to have the bench players offer themselves as human shields for the Great Pedro. The Red Sox clinched a tie for the wild card playoff spot with the win, and any hopes they have for winning the World Series for the first time in 81 years rest on the slight frame of Pedro Martinez.

By the way, my advice not to drive to Fenway Park still stands. Take the subway. Any city where there is a traffic jam at 10:30 p.m. (not near the ballpark) is not a place to drive.