Back in 2004 I toured the Southwest, part of which included a TravelQuest International bus tour of sites related to outer space (astronomy, space exploration, UFO's). If there's a solar eclipse coming up, no doubt TQ has tours to areas where it can be seen. For the Aug. 1 eclipse they have four different tours: Russia, China, North Pole by icebreaker, and North Pole by aircraft.

If icebreaking to the North Pole is not daring enough for you, I just got an email from TQ announcing flights into outer space starting in 2010 for a mere $200,000. Considering the Russians have been offering flights to the space stations for about $20 million, this seems like a bargain. But they are only suborbital flights. Alan Shepard's first Mercury flight lasted only 15 minutes, enough time to experience weightlessness for a few minutes.

Of course TQ is just the travel agency. The spaceline is called Virgin Galactic run by, of course, Richard Branson. Rather than plunk down the $200K, I'll wait and see if discount tickets become available.

The Custer State Park literature says there are bighorn sheep in the park, so I went looking for them today. I figured they would be in the high country up by Sylvan Lake. That turned out not to be a productive idea.

As I was headed back south to see some more bison and pronghorns, which have been a sure thing around the Wildlife Loop the last couple days, I was muttering, "If there are bighorns in the Black Hills I'm never going to find them." A few minutes later I rounded a corner and had to brake for a flock of 11 sheep, including one ram with the big horns.

I think they were licking salt off the road. They hung around for quite a while, eventually crossing the road. The ram was trailing, so I had time to set up and get a good image of his jump over the rail. Click on the images for larger versions. Click here for more photos. 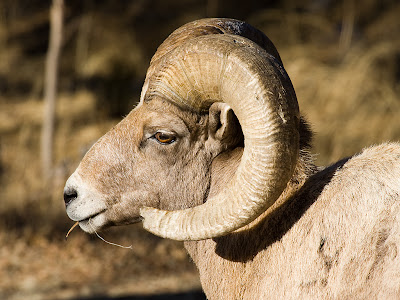 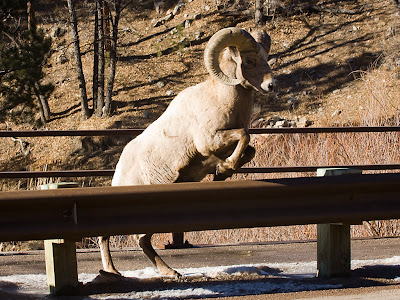 I Am Curious (Brown)

I decided to drive the 400 miles to Custer State Park in South Dakota this week to snap a few bison and pronghorns. Besides the photo ops I was also motivated by the fact it's 20 degrees warmer in the western part of the state this week than in the east.

Almost everything in the park and many of the businesses in the town of Custer are closed for the season, so there's almost no touristas. That's a good thing. But after the first half hour of driving around I was wondering if all the wildlife also had gone elsewhere for the winter.

I finally found a herd of about 50 bison at the southern end of the Wildlife Loop, and also came across several more similar-sized groups of bison and more pronghorn than I've ever seen, perhaps a hundred, many of them right next to the road. So the first day of shooting turned out to be productive.

Toward sunset I was back with the original bison herd getting shots of them settling down for the evening. I've seen the videos of touristas getting thrown 20 feet in the air by bison, so even though I was 50 yards away I was shooting from the car. I noticed one of the bison was heading directly toward me. It wasn't charging, but it was "striding purposefully." From the size of the horns I think it was a young bull.

I rolled up my window to keep him from poking his head through. But he was headed for my front fender. He pressed his nose up against it for 15 seconds, as if he expected something to happen. Perhaps his mother had resembled a tannish '94 Camry and he was hoping for milk. Anyway, he eventually backed off, looking a bit confused, and wandered back to the herd.

The second photo is a pronghorn scratching its head on some dried weeds. Click on the images for larger versions. 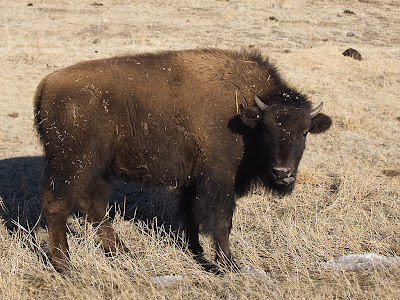 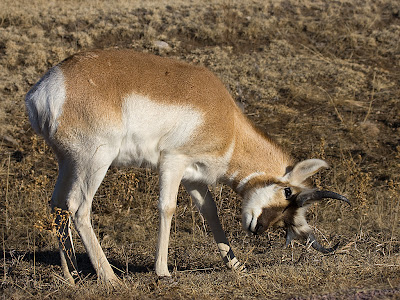 Itchy
Posted by Tom O'Neil at 8:22 PM No comments:

I haven't found an eagle-viewing spot comparable to the dam near Burlington, Iowa, but it's a 450-mile drive for me from eastern South Dakota. I decided to look at somewhere much closer this week, Fort Randall dam in south-central South Dakota, just 135 miles away.

The eagle count was 11 versus 500 for Burlington, but there were a couple of cooperative juveniles roosting in trees on the eastern shore. The adults were more skittish, but I did get a decent flight shot of one. It was worth the drive. For more see Eaglephoto.net. 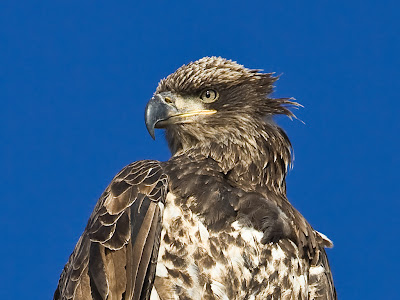 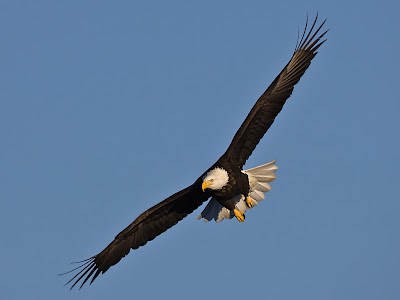