The spirit of Hoosiers will be alive in Brookings, S.D. tomorrow night during a Women's NIT game.

The visiting team in red will be real live Hoosiers, the women's team from the University of Indiana, members of the Big 10. The home team in white, gold and blue will resemble the small-town team from the movie Hoosiers. Playing the role of the Hickory High Huskers will be the South Dakota State Jackrabbits, comprised entirely of players from fairly small towns in the Upper Midwest. The team was in Division II as recently as 2004, and since embarking on the move to Division I has been a transitional independent.

But working against the Hoosiers storyline is the fact that this Jackrabbit team has a more impressive resume its Big 10 opponent. If there are degenerate gamblers who wager on WNIT games, no doubt they will be asking for points to take South Dakota State. Gene Hackman, er, Coach Aaron Johnston has a career mark with the Jackrabbits of 169-54, including 32-3 and a Division II championship in 2003. This year, his team played a strong Division I schedule and went 24-5, beating teams from the Big 10 (Minnesota), Big 12 (Kansas, Colorado), ACC (Virginia), SEC (Alabama) and Pac 10 (Southern Cal), along with NCAA tournament qualifier Middle Tennessee State. The Jackrabbits probably would have been selected for the NCAA tournament, but are not eligible until 2009 due to the transition rules. Their resume and the ability to sell out Frost Arena for women's basketball are the reasons they got the WNIT home game. A crowd of 5,719 turned out Saturday for their win over Illinois State, a school record for a women's game and the most by far in the WNIT this year. That's a few hundred short of the stated capacity, but tomorrow's game already has been announced as a sellout.

(The arena record is 9,456 for men's game against Augustana in 1989. For some reason a group of us drove up from Sioux Falls to attend that game. I can personally attest that it is impossible to see both baskets from a lot of the upper bleacher seating, and I'm fairly sure the Brookings Fire Marshall had a heart attack that night when he saw how people were jammed in. So for the game against Indiana they'll sell tickets for the 6,000 seats with a good view of the court and call it a sellout.)

Megan Vogel is the team leader and the only senior on the team. Her freshman year was the final year the team played in Division II. She is in 2nd place on the school career scoring list by 70 points, so if the team plays four more games she would need to average 17.5 points per game to tie the record. Her season average is 17.6, so it could be close. Vogel also is moving up the charts of legendary South Dakota sports figures. She's no Adam Vinatieri (SDSU, Super Bowl Hero), but I'm pegging her well past Lyle Alzado (Yankton College, Broncos/Raiders, death famously attributed to steroid abuse) and closing in on Mike Miller (Mitchell High, University of Florida, Memphis Grizzlies, video of him getting hit in the throat by Kobe Bryant last year has been replayed a lot recently). And unlike those guys, her greatest exploits have been accomplished while wearing the local uniform.

I was skeptical when South Dakota State announced it was embarking on the transition to Division I starting with the 2004-2005 school year. I don't know whether the men's basketball team (6-24 this year) can be competitive with the 330 other teams chasing March Madness recognition, so in regard to that program I'm still skeptical. I doubt the Jacks could stay within 50 of Syracuse, which is a men's NIT qualifier this year. But the South Dakota State women probably could have gone Division I 25 years ago. No doubt women's basketball isn't nearly as deep as men's basketball, so it's possible for a plucky band of small-town girls to rise up from Division II and live out their Hoosiers dream.

March 22: The Jacks battle from behind to beat Indiana 60-53. Now it gets tough as the team hits the road at Wyoming. Wyoming has a bigger arena and very good crowd support, and the WNIT sponsor is a profit-seeking business. Some folks care even if ESPN's Bill Simmons doesn't.

March 25: The Jackrabbits fall to Wyoming this afternoon 70-59. I can flip back to the Georgetown-Carolina game now, with the sound down of course so I don't have to listen to condescending Billy Packer or the blaring commercials.

Word comes that a new piece of art called Strange Attractor for Kansas City has been installed at Kansas City International Airport. The sculpture is described as a 50-foot-tall structure made of aluminum, wire mesh and neon lighting and is meant to suggest future travel through wormholes or time machines. As shown in this photo from USA Today, it looks like two tubas jammed together. 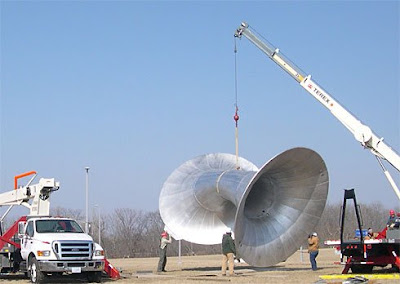 In the five minutes of research I did, I didn't find the price tag for this masterpiece, but I'm guessing that it wasn't free. I haven't been there since last year and the web site claims there have been significant renovations recently, but I didn't seen any mention of restroom upgrades in the terminals.

Whether traveling by car, airplane or wormhole, I take the precaution of visiting the little boys room before I embark. But because KCI was designed back before anyone thought we would need security at airports, there is nowhere to pee (at least not without the risk of arrest) or get any refreshments after you go through the security checkpoint. What other airport of any size is similarly deficient? Before installing any more futuristic tubas, perhaps it would be a good idea to put in a few more old-fashioned porcelain fixtures.