Now that we live just over an hour from Yellowstone, it's easy to do an overnight trip and see a lot. Yesterday we toured the waterfalls and the lake area, which are nice to look at but don't float my boat photographically. Today we saw the usual elk in Mammoth Hot Springs and a black bear at the east end of the Lamar Valley. Even though summer officially ended 10 days ago, I've added six images to the Summer 2020 gallery. Click on one of the images below to start the slide show starting with the most recent images.

It has been an eventful summer, and I'm not referring to the virus, sanctimonious politicians, or "protesters" helping themselves to "reparations" from smashed storefronts. I choose not to let any of these detestable infestations change the way I live, except I wear a mask when I go to Costco. We have been in the process of moving to Montana, and there have been a few photo ops along the way.

There were 4th of July fireworks in our new Montana town, and there have been deer running through our new back yard. My Browning trailcam even captured a moose wandering through the back yard. I drove through the Badlands a few times and found a concentration of burrowing owls. I was able to retrieve my Reconyx trailcams from a Montana mountain after 13 months and found some interesting images, including one of a mountain lion. We went to Colorado and I snapped a few hummingbirds at the venue of our wedding two years ago. And there was a quick trip to Yellowstone. It's a bit of a mish-mash, but click on one of the images below to load the slide show starting at that point.

To paraphrase Dean Wormer from Animal House, “Fat, drunk and Vitamin D-deficient is no way to get through the pandemic, son.” There's nothing definitive yet, but it appears the best protection from the virus may be to improve your eating habits, refrain from drinking yourself into a stupor, and go for a walk in the spring sunshine. In particular, sunshine on the skin helps develop Vitamin D, which seems to be beneficial in fighting off the virus. Yes, healthy people with no known health problems have gotten and died from the disease, but there is no argument that by far those most susceptible are sedentary people with pre-existing health problems, people more likely to be sitting inside on their ass, even if that is not their choice.

Studies show that there has been no significant difference in progress of the disease between European countries that had no lockdown (Sweden) versus those that had police-enforced house arrest (Hungary). Somewhere, an authoritarian is weeping...no, they're not weeping, they are suppressing this information. "Experts have expressed concern that Sweden's refusal to implement a lockdown will lead to increased deaths," according to a German news site. "Expert" opinions that so far are not backed up by the evidence. "We who are adults need to be exactly that: adults. Not spread panic or rumors," Prime Minister Stefan Lofven said early on in the pandemic.

It is sad that the old and frail are dying in disproportionate numbers, but having everyone else hiding inside their houses does not help them. Nursing homes will not be allowing visitors anytime soon whether there is a general lockdown order or not. Be prudent and practice social distancing, but stop hiding. Get some sun. 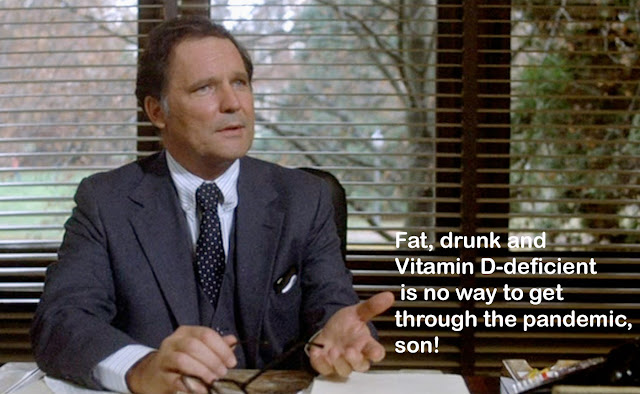 The waterfowl near a local pond will be thoroughly documented in this year of the pandemic. Earlier this week it was geese, and today it is ducks. I saw a couple of mini-dramas playing out as a pair with six ducklings chased off an intruding drake, and 2 or 3 stray ducklings seemed lost. It is not a large pond, so I expect if the parents are trying to find them, they will. If not, nature can be cruel no matter how cute you are. 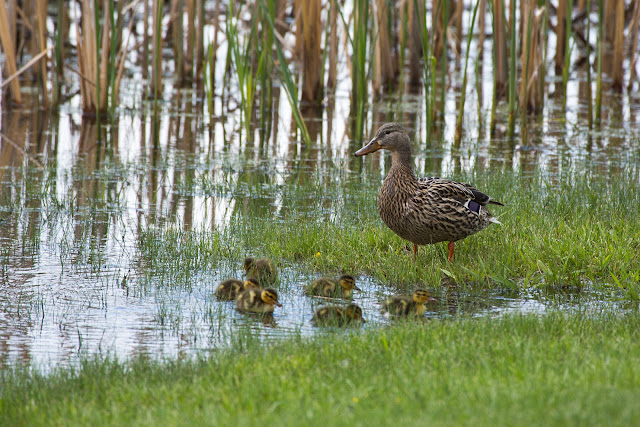 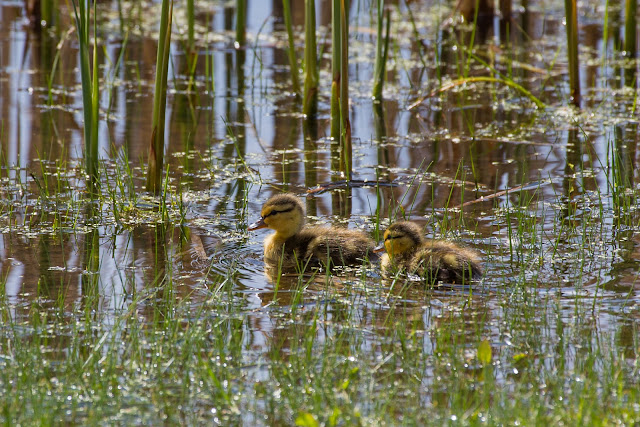 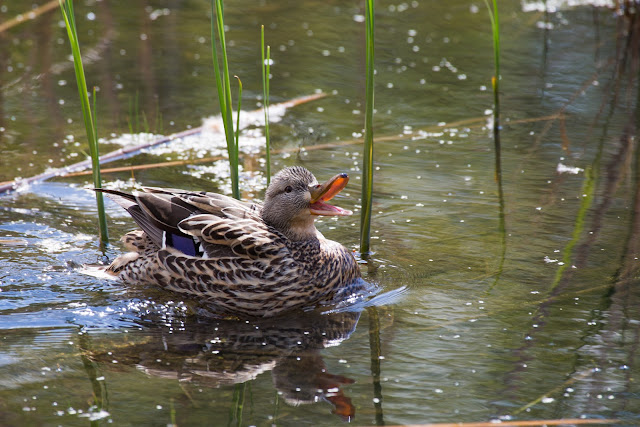 An interloper is detected by the female. 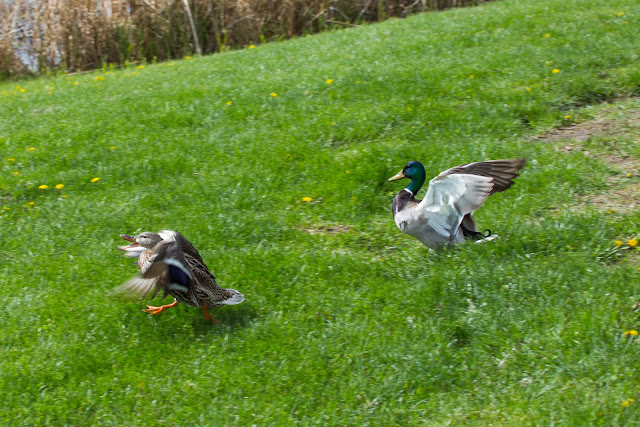 The interloper gets the upper hand temporarily. 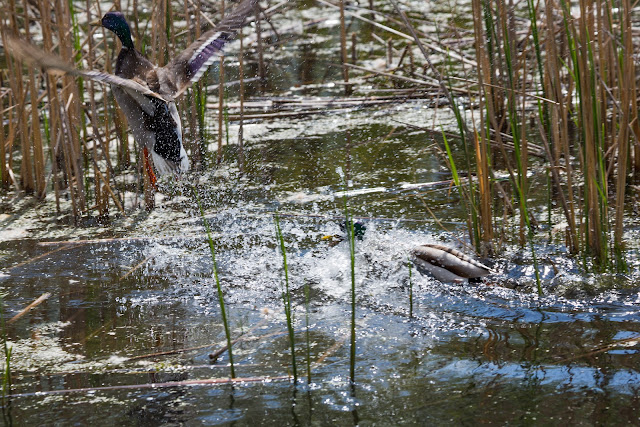 The drake drives off the intruder. 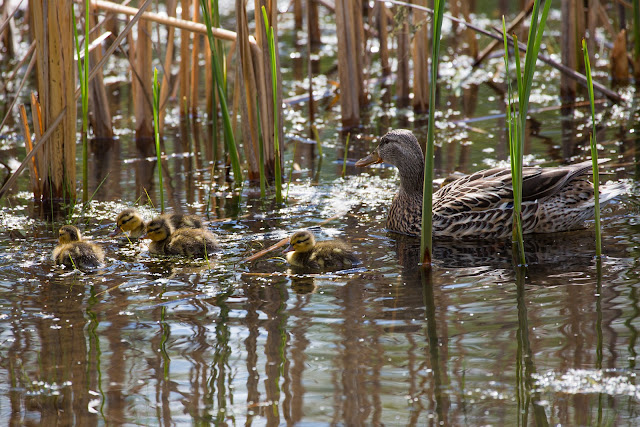 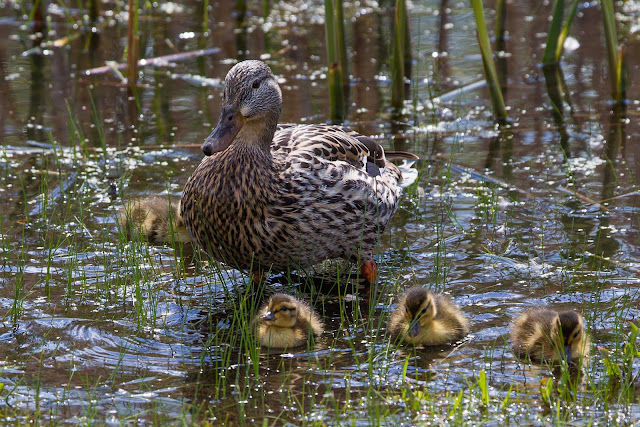 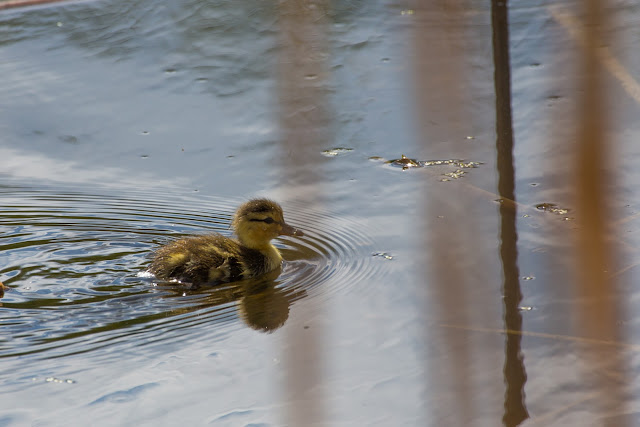 This little one and a couple of others seemed to be having difficulty finding their parents. They were driven off when they came across the pair with six ducklings.

Most Years At This Time...

Events have conspired to keep me from traveling to my usual haunts, so I've been taking my Canon M100 with 70-200 lens on my local bike rides hoping to get the baby geese when they appeared. Today they did. 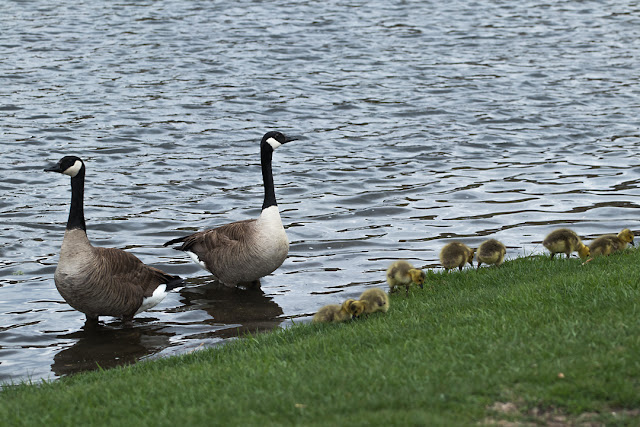 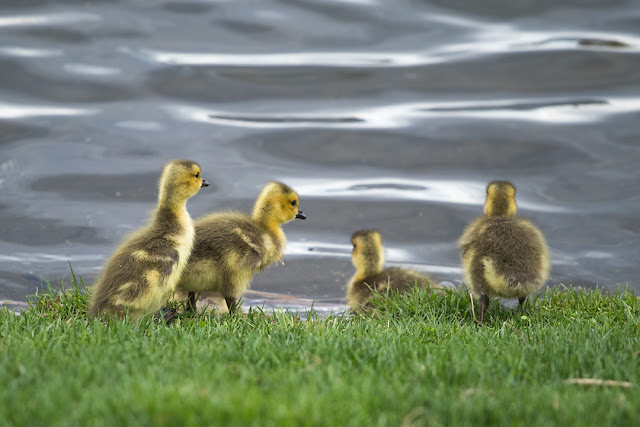 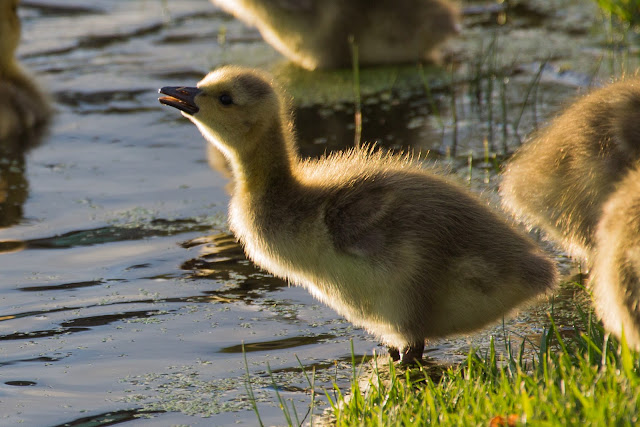 Last May in Custer State Park and environs was more interesting but you take what you can get. Click on the image for a slide show.

I feel so lofty and superior to the maniacs who are out scrounging for toilet paper. But I can feel that way because I did an inventory and found a treasure trove. From my last Costco run several months ago, I still have 11 full rolls plus two partials upstairs, and I'm guessing a couple more in the basement. Not to mention the partial roll out in the truck for "emergencies." In a Salon article on the panic buying, the author claimed that the typical person uses 100 rolls a year. In what universe do these TP hogs live? Maybe I'm not typical, but I would guess my annual usage is 30-40...OK, my bride just explained to me that men and women are different. We still maintain separate residences until our new house is finished in a few months.

But as the only full-time resident of this house, I calculate that I'm sitting like a king until mid-summer, at which point the crisis will be over...or we will be in a full-blown zombie apocalypse, in which case toilet paper will be the least of our worries. I may have to start watching The Walking Dead to pick up some survival pointers.

I've seen this before. When I lived in Massachusetts, people would grimly flock to Shop 'N Stop (or is it Stop 'N Shop?) to stock up on essentials every time a Nor'easter was headed their way. (I don't know why the media spells it with all those r's; New Englanders actually pronounce it "Naw-THEAS-tah.") Either these people had survived the Blizzard of '78, or they heard about it ad nauseum from their parents and grandparents. After the storm subsided and inevitably was not a repeat of '78, they found themselves with a huge cache of TP and bottled water, and gallons of milk that was about to spoil.

In August 1991, Hurricane Bob rolled up the East Coast, and just two months later the ultimate Nawtheastah, The Perfect Storm, came in from the North Atlantic. I admit, I lived to the south well inland, not in Gloucester on an exposed peninsula, but after surviving 30+ years of South Dakota blizzards I was not impressed. Bob, my very first hurricane, was just a rainy afternoon, and I don't remember The Perfect Storm at all. In the years I've been back in South Dakota I haven't seen routine hoarding leading up to blizzards, but a few days ago Walmart was almost (not entirely) out of TP and very low on rice and pasta. I know this emergency will last longer than a couple days, and I agree that it's a good idea not to gather in large groups and pass the virus around. I am not minimizing the problems the good people of Washington state and Italy have had, nor denying that it may still hit us hard. But so far the stores remain open and the local infection rate is 0.001%. Life goes on somewhat normally, albeit without basketball.

Update: I have 3+ rolls in the basement bathroom, but it's not the good stuff.

I don't disagree with the intent of the new California data privacy law that went into effect this year. Anything that makes Google or Facebook squirm is fine with me. But so far the only effect of this and a somewhat similar European regulation is there is one more stupid button to click on when you visit a site, joining the ranks of millions of meaningless government-mandated disclosures that pollute our lives. My web site thomasoneil.com does not plant cookies or collect data so I will not be adding a stupid button.

I've been doing this now since 2002, and since I'm the only one allowed to enter I can make up the rules as I go along. It was a year in transition as we began preparations for our move from the Midwest to Montana. The POY is from January when we toured Yellowstone, first by snowcoach to the waterfalls, then by vehicle through the Lamar Valley. This image is from along the Madison River, a coyote working its way through the snow and up a snag of trees. There also were some interesting bighorn images from the Lamar Valley, a flying baby bison in Custer State Park, 4th of July fireworks in Red Lodge, MT, the Thunderbirds, and what may be my last eagling trip to Missouri.