Twice in a lifetime.

Coverage of the transit of Venus across the face of the sun yesterday often referred to it as a "Once in a lifetime event." Sounds good, except for those of us paying attention back in 2004, it happened then also. It's one of those quirks that Venus transits occur in pairs separated by 8 years, then not again for more than 100 years.

This transit occurred during the last week of a 7-week work assignment in New York City. It was a mostly cloudy evening, but the clouds parted for a few seconds at a time and gave a view of the planet crossing the face of the Sun. Although I have the equipment necessary to photograph such an event, it's tucked away in my basement in South Dakota. I didn't lug a telescope and tripod along on my trip to New York.

So what I had was my point-and-shoot camera, image-stabilized binoculars, and a plastic solar filter held in place with cardboard and tape. No tripod, so I held the camera up to the binoculars eyepiece. Due to the clouds and the difficulty of locating the Sun in the viewfinder, I got only five shots. Four were blurry and this one was halfway decent. Click on the image for a larger version. That's Venus at the top, of course, but also note the sunspots in the middle. 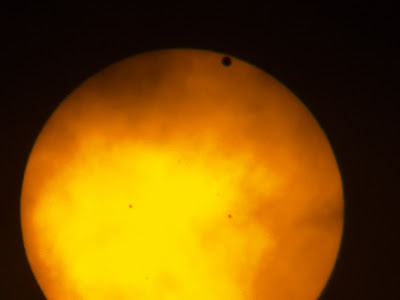 Here's a shot from the 2004 transit taken with my digital SLR, a 300mm lens, and a couple of teleconverters. I also took some film SLR shots, but the photo processor lost my film! Another reason to go all digital.

It's my last weekend in New York so I'm snapping the last few pictures from here EVER, but I can't post until next weekend because I'm without my photo editing computer. My hotel is in Chelsea these two weeks, so I headed west down 23rd today and found the High Line.

The High Line was an elevated rail that has been transformed into a city park. It's nice. But it's not $154 million nice, and it's still only two-thirds done. I can't believe they sunk that much money into such an inconsequential swatch of acreage. Where I come from, they could build a park about the same size for $2,000. But I'm from a state with plenty of bare land and only 11 people per square mile.

After 21 weeks here the past three years, I'm New Yorked-out, in case you can't tell.