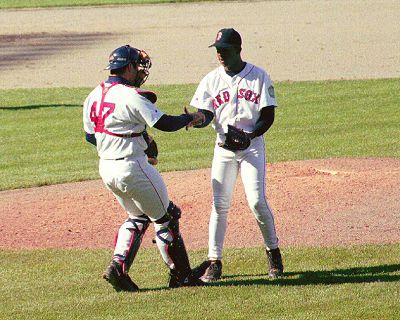 My goals for the summer aren't very high. Clean out my garage and basement, and get a few shots of some bluebirds. Today I made my first attempt at the latter.

About 15 miles up the road is Mass Audubon's Stony Brook Refuge. Last fall I saw bluebirds there but didn't get around to attempting photos. I took my new digiscoping setup there today hoping to get my first-ever bluebird images.

When I first got there a mob of kids was involved in some sort of activity near the nest boxes where I thought the bluebirds would be. I took a short loop around the pond with just the camera to kill some time, and eventually saw (and heard) the gaggle of noisy darlings move off to another area.

But when I set up the telescope, all I saw at the nest boxes were swallows, not bluebirds. I practiced on the swallows, then by chance saw a bird rise up from a faraway box and land in a tree about 75 yards away. May as well check it out, I figured. Lo and behold, it was an Eastern Bluebird.

This was with a Televue 85 scope, 40mm Scopetronix 2" eyepiece, 2x magnifier, and Canon G6 camera. I lurked around for a while longer, but didn't get any other opportunities. Not bad for a first attempt at that distance, but I hope to get something better this summer. The refuge isn't far out of the way on my commute home from work, so I'll see what I can get in the late afternoon some day this summer.

Here is a more controlled experiment, a goldfinch at the feeder in my back yard. I paced off the distance at 20 yards, which is the minimum distance at which I can achieve focus (without the 2x magnifier). This is cropped, so a small bird does not fill the frame at 20 yards.

I've posted a lot of digiscoping images in the past few weeks because the new gadgets I have are so much better than what I had before. There still are limitations, but they are different than what they were before.

For the first time in about a week the sun broke through the gloom today in the Northeast, and as a bonus there is a full moon tonight. What better time to test out some new digiscoping gadgets.

Gadget No. 1 is a new glass solar filter to replace the one made from cardboard and polymer film, which somehow got a hole burned in it. (Actually I know exactly how it happened. Don't ignore the precaution about placing polymer film at the back of the scope instead of the front!) The filter has a more neutral cast than the film, which was very orange. The main reason I got the filter is the upcoming transit of Mercury Nov. 8, so I've got a few months to practice focusing.

This type of filter only shows sun spots, not the orange peel surface and the prominences that some other solar filters show. I have a Coronado Personal Solar Telescope which shows some of that detail, but I've never been able to focus the thing well enough with a camera attached to get a usable photo. This isn't a great effort, but I was having difficulty pointing the scope because the sun was high overhead and a tripod with a video head isn't made to point straight up. Fortunately the sun will be lower in the sky during the Mercury transit.

The sun shot was taken with the 40mm eyepiece attached to the Canon G6 camera, which I also used for the chipmunk shot a few weeks ago. I had to crop the image to get the sun to appear this large. For the moon shot I added new gadget No. 2, a 2x lens which, if I'm doing the calculations correctly, increases the magnification from 42x to 84x. The moon fills the entire frame at that magnification.

For detailed photos of the lunar surface, it's actually better to shoot during other phases when the light is coming at an angle. At full moon with the sun shining directly onto the surface, there's less definition.

I haven't yet received new gadget No. 3, which is a solar finding accessory for the telescope. I won't be burning holes in things once I get that. But other than the transit of Mercury and the occasional solar or lunar eclipse, I don't plan to point my camera at celestial objects very often. There are images from other sources that are so much better than what I can do with my gadgets. My plan is to use the digiscoping setup on birds roosting and nesting. When I have time, there are some bluebird nest boxes that I want to shoot.