At my annual eye exam two years ago, I first noticed that the corrective lenses prescribed for my extreme, life-long nearsightedness no longer brought the world into focus. Last year, the eye doctor acknowledged that I was developing cataracts but didn't think it was necessary to pursue treatment at that time. After the past few months when one stoplight became three and I thought perhaps I was becoming a road hazard, I asked my regular doctor what he thought. He shined a light in my eyes, said "cataracts," and immediately referred me to an eye surgeon.

Ten days ago the surgeon removed the cloudy lens from my right eye and replaced it with an artificial lens. Four days ago, the procedure was performed on my left eye. In the six days in between, I was able to compare what the world looked like through a cataract versus a clear lens. Even though I knew the cloud had been reducing the amount of light that passed into my eye, I was surprised at how much brighter everything was. Even more surprising was the color, which I had not noticed was shifting toward the murky. Have you ever seen a piece of aged plastic that used to be clear? It turns yellowish brown, and that was what had happened to the lenses in my eyes.

The audience for network evening news is old people, so the commercials often are for the multitude of medicines that old people need. The sales pitch is followed by the list of side effects, some of which are quite horrendous and alarming. While there are potential negative side effects to cataract surgery, there was one positive side effect I hadn't thought of: I am no longer nearsighted. The implanted lenses fixed it. I've been wearing glasses every waking moment since age 7, but now I don't need glasses for distance vision. I still need reading glasses, but as I'm at my computer typing this I'm not wearing them.

This image of bighorns in the Badlands approximates the difference in my eyes without glasses between the surgeries. Most (but not all) of the blurriness is due to my nearsightedness, so not everyone with cataracts will be this blurry. This actually understates the problem because it doesn't show the triple vision I was experiencing. Click on the image to see a larger version, and welcome to my (former) world. 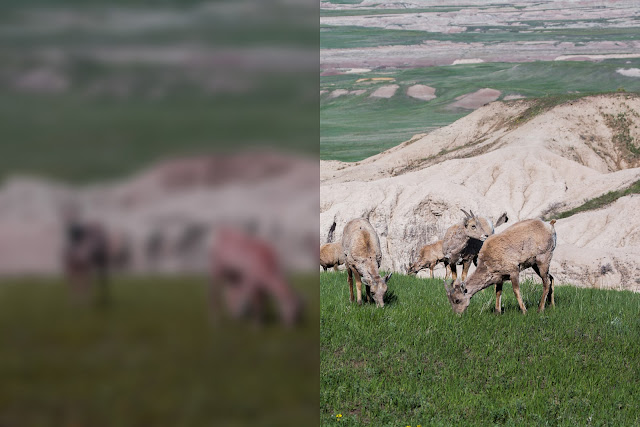 I started driving again a couple days ago. As I settled into my truck, I noticed with relief that I was able to see the dashboard without the reading glasses. I also noticed the MPG number on my dashboard. I thought Ford was stupid for using a small blue number on a black background which nobody could possibly see, particularly during the day. After the operations, it is crystal clear even during the day. So maybe it was me.

I probably should have started gathering information in late 2016 after I first started noticing that my glasses weren't doing the job. Certainly after my eye exam in late 2017, I should have been more insistent that I needed something other than a new glasses prescription. My suggestion is if your eye doctor ever says it looks like you are developing cataracts, ask about the surgery. It is a relatively safe procedure and I'm unaware of any benefit of putting it off until you see three stoplights where there should be one.

One week later: I used to have a superpower. I used to be able to read the tiniest print by holding it four inches from my face. Now that I'm no longer extremely nearsighted, those days are gone. I suppose now having 95% of the world in focus makes up for it.

Five weeks later: After waiting for my eyes to stabilize and for delivery, I finally got my new glasses today. I'm slightly nearsighted in my right eye, which was planned (monovision), but I primarily need glasses for reading. The new lenses are one-third the thickness of the old lenses. If high index lenses had not been invented, the difference would be more dramatic. Maybe this sounds mundane to anyone who has always been able to see, but for me it still feels like a miracle.
Posted by Tom O'Neil at 3:21 PM No comments: