I'm headed to Las Vegas tonight. When I say that it elicits a certain type of response, so I hasten to add that LAS happens to be the closest airport to Death Valley, which is where I'm going first. Casinos, lotteries and other such entities would not exist if they had to depend on me for business.

It will be a wide-ranging trip, also including Bosque del Apache NWR in New Mexico, the sky islands of southeast Arizona, the Arizona Fall League in the Phoenix area, and the Aviation Nation air show back in Las Vegas. I'll post text message updates throughout the two weeks and eventually there will be photos.

Final item about the World Series: I checked the Venezuelan newspaper at eluniversal.com to see the reaction in Ozzie Guillen's homeland. Since I don't do Spanish I had Google translate it. I was able discern that they are very proud of Oswaldo, but here is proof that online translations are far from perfect:

Now in Chicago one hopes that the other local equipment, the Puppies, that militate in National Liga and which they have not gained a title of the Classic one of October from the season of 1908, is the next ones in putting the ring of winners.

I think it is more likely the 100th anniversary of Orval Overall's '08 series clincher will come and go long before the Puppies enjoy another Classic one of October title.

I heard the end of the third game of the World Series this morning, sometime after 2 a.m. Eastern time. I didn't see it because my eyes were closed, as they are most nights at that time, but I was awake and listening. I heard them say at five hours and 41 minutes it was the longest game in World Series history, but only a tie for most innings, 14.

And they said the other 14-inning game was Boston beating Brooklyn 2-1 in the 1916 World Series, so I looked up the details this morning at Baseball Almanac. The time of game was reported as 2:32.

How can a 14-inning game take twice as long now as 89 years ago? There were 17 pitchers last night, and many of those pitching changes came during innings. Back in 1916, both pitchers went all the way, with Babe Ruth outpitching some guy named Sherry Smith. Fox wasn't producing the show in 1916, so that also sped things up considerably.

Maybe they can't prevent games from going into extra innings and dragging on, but I do have one suggestion for moving things up by 40 minutes – cut out the pregame show. No one cares what Kevin Kennedy and Jeanne Zelasko have to say. Get rid of them, start the game at five minutes after the hour, and maybe we can get done a few minutes before 2:00.

Useless Factoid o' the Day: Fox does not have a monopoly on worthless information. While browsing Baseball Almanac, I found that the winning pitcher for the Cubs in the deciding game of the 1908 World Series was Orval Overall. His bio link says "Nickname: None." With a name like that, you don't need a nickname. With two wins in the series, I guess you could say he was the best pitcher Overall.

The World Series teams are set and it's good to see some new faces in there. I'm usually an American League backer but I have family in Houston so I suppose I should cheer for the Astros, for what it's worth.

This summer at several games, I assumed I was seeing the 2005 National League champs in action. But at the time I assumed it was the three games involving the Cardinals. When I saw the Astros, they were at their much-publicized 15 games under .500.

It turns out I was there when the Astros started to dig themselves out of that huge hole. On May 27, they were 16-31 after dropping the first game of a series against Milwaukee. I saw the next two games that last weekend in May at Miller Park, with the Astros winning an atypical 9-6 slugfest on Saturday, then taking a more characteristic 2-1 win on Sunday with a quality start from Andy Pettitte and a heart-attack save (two on, nobody out) from Brad Lidge.

From May 28 to July 31, the Astros went 41-17 to climb from sixth place in the division to leading the Wild Card race. Next week the World Series comes to the State of Texas for the first time. My useless bit of trivia regarding that is there is now only one early-1960's expansion team that has not been in a World Series – the second incarnation of the Washington Senators, now known as the Texas Rangers. With all the curse-breaking that has been going on in recent seasons, maybe it will be Rangers-Cubs next year...nah, probably not. 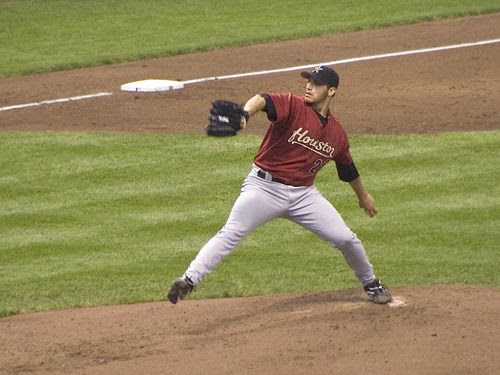 It's October and we all know what that means for true baseball fans – the Arizona Fall League season is underway. Although I'll probably make it to just three games, this is the seventh time in the last eight years that I'm making the journey west to see the top minor leaguers in action and get a few photos.

In previous years I set up HQ at a Scottsdale hotel because two teams played at Scottsdale Stadium. This year the stadium is being renovated so the two Scottsdale teams are playing at the new Surprise facility on the other side of the valley.

Of course October also means the major league playoffs on TV. Once again we are subjected to the inane utterances of the "analysts" that Fox and ESPN dig up for the occasion. Tim McCarver is just so Profound that after five minutes I want to run out of the room screaming. Mike Piazza, please consider taking a class because the on-the-job training thing just isn't working out. And Steve Lyons, please please please just shut up! Sometimes I try watching with the sound muted, but then I miss the crack of the bat and the roar of the crowd. For all those TV execs looking for a way to increase revenue, how about offering Pay Per View with NO announcers, NO network promos, and NO junk statistics. I would pay a few dollars for a channel that had just the basic video feed, a few replays (not 10 of each pitch), graphics just for basic stats, and the stadium sound. I've been watching baseball for 40 years; I don't need Fox treating me as if I don't know which end of the bat to hold.