I've seen hawks at my office hundreds of times, but I've never seen one from my back yard before. The woods are thick, so I figured it isn't the best hunting ground for them, and even if they were around, the foliage obscured them.

The leaves are absent now of course, and out of the corner of my eye this morning I caught a glimpse of a big bird coming in for a landing up in a tree about 50 yards away. For an instant I anticipated the crash of a turkey clumsily coming to roost, then I realized that the bird was a red-tailed hawk. (I presume all hawks that I see are red tails unless it's obvious they aren't; this policy saves me a lot of time struggling with hawk IDs.) I was able to bring my big lens and a 2x extender to bear to get this shot at 1,000mm, cropped. And after further review, I still think it's a red-tailed hawk.

Another "new" bird actually started showing up a year or so ago. I figured when a batch of about five little gray birds started coming around, it was the fledglings of something familiar. When they still looked the same after several months I began to suspect they were a separate species. After going through my bird book today I decided this is a Dark-eyed Junco, slate-colored variety.

This one isn't a new arrival. It's just today's Jay gorging on corn. Click on it for a better view of the crumbs flying.

I was hanging around the suet feeder at Daniel Webster Wildlife Sanctuary, a Mass Audubon refuge, waiting for woodpeckers. I noticed that chickadees were sampling the suet. Chickadees are meat eaters. Who knew?

And the woodpeckers also came around. The Red-bellied Woodpecker is so-named for the patch of red on the...back of its neck? No, really there is a patch on its belly that you can't see most of the time because woodpeckers usually have their belly up against something. There is a woodpecker that is named for its red head, but this isn't it:

There also were a couple of Downy woodpeckers.

I haven't trusted the weather enough to take my new 500mm lens anywhere so the local birds continue to be my test subjects. The first one is a tufted titmouse feeding on pears in my front yard. I don't remember what variety of pear tree it is, but the fruit is tiny, about the size of a cranberry.

I've been shooting mostly with an aperture of f/5.6, which at ISO 400 resulted in a shutter speed of 1/250 for this one. A chickadee ducks out of the way as a tufted titmouse blurs past.

A few years ago in the woods near my house, I found an what was left of old post. One side and the middle had rotted away, leaving a semicircle. I dragged it home, set it up in my garden, and screwed a tuna can to the inside. I filled the can with seeds, and I had a posing post for the birds.

That's why a lot of my Backyard Habitat photos feature the same post. Cracked corn works well for attracting blue jays, and the jays provide a good subject for my 500mm lens tests. The only trouble is sometimes they sit on the edge of the hidden can rather than the post.

The corn also attracts the squirrels, which I consider a nuisance most of the time. However, they do provide good test subjects for the 500. From the side with the tail up in the air, a squirrel more than fills the viewfinder at 16 feet (five meters in that silly metric system). This pose was more interesting.

Every once in a while something comes along that I've never seen before. My Sibley bird book suggests that this is a Winter Wren, and today was the first time one flew into range of my lens. Very brown!

For just a few shots today, I tried the 2x extender, which converts the 500mm f4 to a 1000mm f8. The result was OK, but not worth posting. I'll have to do more tests with the 1.4x and 2x to see how well they work, but my research indicates they are well worth using. With this new capability, my attempts at digiscoping have come to an end for the most part.

I've acquired eight digital cameras in eight years, with #6 being a Canon S45 4-megapixel model. I have two newer cameras that get the usage now, so I sent the S45 off to a new home yesterday and admit to getting a bit nostalgic during the packing.

Three years ago as I was getting ready for my trip to Antarctica, I decided my 2mp Elph wasn't robust enough for such a trip so the S45 was acquired to fill the role of compact camera. After my 50mm SLR lens broke during the trip, the only other SLR lens I had along was a 70-200 telephoto. The S45 had to cover the wide and normal ranges. I'm not going to claim this is anything but a snapshot, but it is my favorite S45 image. It's a gentoo penguin on the shore inside the volcanic ring that is Deception Island with the Clipper Adventurer in the background.

The S45 also made it to the Galapagos, British Columbia, and quite a few places in the US. Although there were reasons why I bought a G6 instead of the S45's successor S70 last year, the line which included the S45 up through the S70 was rather compelling. These cameras are more compact than the G series, but almost as packed with useful features. In fact, when I convinced my employer that we needed a new camera for the office, I was able to specify purchase of an S70. (Unfortunately after they made the S70 and G6, Canon apparently decided to dumb down the entire Powershot brand. The S80 and G7 do not measure up to their predecessors.)

It's a coincidence, but as the S45 was rotating out the door yesterday, a new SLR lens was rotating in. Actually, referring to Canon's 500mm f/4 as a lens is like calling a Lamborghini a car. It's accurate but not descriptive. Until I get somewhere, for now I have to be content with hunting the nuthatches in my back yard, the equivalent of swatting mosquitoes with a sledgehammer.

No doubt about it, the 500mm is a big, pro lens. I've resisted using a tripod or monopod with the mid-sized 300mm f4 I've had for eight years, but there is no choice with the big 500mm. Using it successfully will be a challenge. I feel sort of like David Clyde getting yanked out of high school to pitch for the Texas Rangers. Hopefully I'll have a longer career as a (semi-) pro shooter than Clyde did as a pitcher (career 18-33 in five seasons).

I've reached home and have been able to Photoshop a few images from my Missouri eagle trip. My verdict on the digiscoping setup is: It works, sometimes. Manual focusing can be a drag, and I fear that the wind made the tripod too unsteady much of the time. But enough of images were sharp that I was able to conclude it is a viable setup when extreme magnification is required. I calculated that under ideal conditions it is five times more powerful than my 300mm lens with 1.4x extender, or the equivalent of 2,200mm, 44x. Here are two images of the same scene, the top one digiscoped and the other from the DSLR.

The DSLR version is heavily cropped to appear the same size as the other image. I think the eagle on the right is better in the digiscoped version, but the one of the left is slightly out of focus. The depth of field is very shallow with the scope even at that distance, which means focusing is critical and can be difficult.

A trip report can be seen on eaglephoto.net, and photos have been uploaded to thomasoneil.com.

This week I'm scoping out the eagles and other critters at Squaw Creek National Wildlife Refuge in northwest Missouri. Based on my drives yesterday and today, I would guesstimate there are about 30 eagles flapping around, fewer than the peak of what I saw last year. There seem to be fewer geese but maybe it just seems that way because they have been quite far out in the pond. And there are lots of ducks. The waterfowl surely number in the tens of thousands.

Most of the eagles are transients, but there are some residents. Just based on what I've seen on this trip, I think the two adults and several juveniles which hang around the nests in the northwest part of the refuge are the full-time residents. Even though this isn't the season the nests are used, the birds are lurking around them and occasionally roosting on them. I don't think eagle pairs necessarily stay with each other year-round, but these two seem to. The active nest is in the same tree. 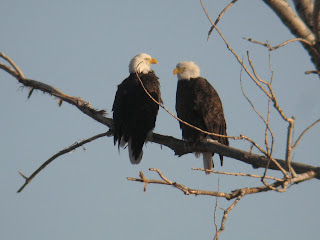 This photo was digiscoped, shot with a Canon G6 through a telescope. Using this combo provides more magnification than is possible with a DSLR and a 420mm lens, but it requires a stationary subject and a few minutes to set up and focus. I'm not 100% happy with this image, so hopefully when I have a chance to go through the rest of my attempts there will be some that are a bit sharper. And if all else fails I also have my DSLR shots, less magnified.

I'm here another day and a half, and in a week or so I'll be able to post some more (better) photos.

By the way, I also saw a line of 18 turkeys running across a field headed for a stand of corn. But they were along way away, and I have enough photos of turkeys.

After months with turkey photos on my home page and college football rants in my blog, I'm finally getting out to snap some new photos. Look for eagle photos from Squaw Creek National Wildlife Refuge in northwest Missouri next week. Previous visits to the refuge: