As I was snapping the two Great Horned Owls in Florida last year, I knew I had a winner. I selected an image from that sequence as my personal Photo of the Year for 2008. When I found out there was a $200 prize for a nature photo contest at a local lawn and garden show, the owls were an obvious choice. 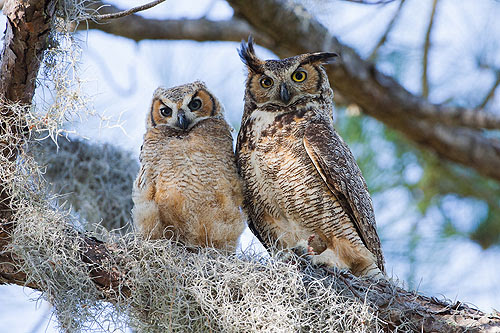 Eagle-eyed observers may note that this image is not the same one that I picked for my Photo of the Year. What can I say – I happened to have an 8x10 print of the alternate version, and I was too cheap to spend $1 to get the other one printed.

The NCAA Division 1 Summit League men's and women's basketball tournaments were in Sioux Falls this week. I've been pondering my new role as a graduate of what is now a Division 1 school, South Dakota State. 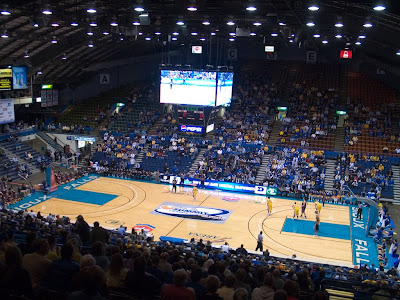 Jackrabbit women at the Summit

SDSU embarked on the long transition process to Division 1 in 2003-04. At the time I thought the brain trust in the Jackrabbit athletic department was suffering from delusions of grandeur and I foresaw permanent irrelevance as a Division 1 competitor in basketball and football.

Teams in the transition process have to endure a Twilight Zone existence for five years, no longer Division 2 but not yet Division 1. The Zone is populated by the likes of New Jersey Tech and Utah Valley State, schools that have to schedule anyone anywhere in the country to get the opportunity to call themselves "Division 1."

Despite my earlier misgivings, I have to say the transition worked out as well as could be expected for SDSU. The primary reason for this is the Jackrabbits were able to join decent conferences, the Missouri Valley in football and the Summit League in everything else.

Now that I'm a Division 1 guy, I'm starting to get what being Division 1 is all about -- appearing on national television. Since that is the primary goal of all Division 1 basketball programs, I'm learning to resent all the butt-smooching ESPN and CBS bestow on the major conferences in the Eastern time zone while neglecting the Summit Leagues of the world. The predictions of the four men's #1 seeds have been changing from hour to hour as the favorites lose in their meaningless conference tournaments. Meanwhile, I set my DVR to 6:00 CDT Monday to catch the women's bracket announcement and see where my Jackrabbits, Summit League champions and ranked #14 nationally, are seeded. A #5 seed and a first-round game in Iowa City would be good; any lower or further away and as a Division 1 fan I would be obliged to come up with a conspiracy theory regarding the prejudices of the selection committee.

Update: A #7 seed and playing against Texas teams in Lubbock represents a snub. The ladies took it out on TCU with a tournament record-tying three-point barrage and coasted 90-55 in the first round. Fear the rabbit.