In April I mentioned the DVD America's Wildest Places - Volume 1 from the U.S. Fish and Wildlife Service. The second DVD in the series was released late last year, and I recently ordered it for the very reasonable price of $6 each plus $2.50 S&H per order. With each order they also throw in a large map showing the location of the 550 national wildlife refuges.

The first DVD was a compilation of videos from eight national wildlife refuges around the country. I had never been to any of the eight, although since then I have been to Horicon NWR in Wisconsin. There also are eight videos on Volume 2, although one is an overview of the entire refuge system and another is a short cartoon. Two videos cover refuges that were already familiar to me – Bosque del Apache NWR in New Mexico and Blackwater NWR in Maryland. The other four cover refuges in Alaska, Illinois, Mississippi and Montana. It is surprising to learn from both volumes the great extent to which many refuges (with the exception of those in Alaska) were created and are maintained by humans. Much of the habitat along the Rio Grande for migrating birds was lost, so Bosque del Apache was constructed in 1939 and has to be actively managed. 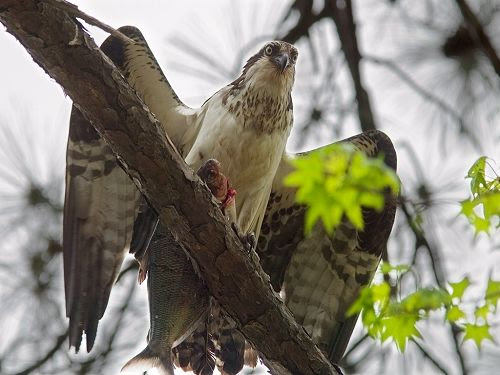 Osprey with a fish, Blackwater NWR, 2003

As I said after viewing Volume 1, these videos are not Hollywood productions, but they are useful for planning a trip to a place you've never been. For example, the State of Mississippi has never been on my list of places to return to, but the bird rookery shown on the video for Noxubee NWR suggests it could be an alternative to a Florida trip.

If you want production values and glitz, get March of the Penguins

. That's another recent DVD acquisition, but I haven't viewed it yet. Football season is almost over so perhaps I will find time to view it soon.

As I squinted at the time early Saturday morning (4:30 a.m.), it came to me that I had forgotten to put out the trash. I knew it would be difficult to get back to sleep without resolving that situation, so I threw on some clothes and dragged the stuff out to the curb. Walking back up the driveway, I noticed a bright planet trailing behind the half moon. Saturn, I thought.

Oh well, there's no time like the present. I quickly set up my Televue 85 telescope and took a look at 75x. Instead of rings, I saw a banded disc surrounded by four little dots: Jupiter and the Galilean Moons. I checked my calendar to find out when Saturn would be up, and 18 hours later I returned to the back yard and found it high overhead.

As it turns out, Saturn's orbit will be at opposition this coming Saturday. That means the orbits of Earth and Saturn will be as close as they get in a 378-day cycle, and Saturn will be overhead at midnight. I use my Televue more as a wildlife spotting scope than an astronomical scope so my mount is just a photo tripod with a video panning head. But it worked well enough to find (at 138x) the ringed ornament hanging in the sky. If there's a neglected telescope stuffed in a closet, now is a good time to dig it out and take a look at the rings. Saturn rises in the east and sets in the west just like the Sun and Moon, so now should be visible throughout the night. And if you happen to be setting out the trash at 4:30 a.m., the Jovian system also is worth a look. (Or you can wait until May 5 when it will be at opposition.)

After some dabbling in astro observing and photography, I decided a while ago it would save a lot of time and frustration if I would do my astronomical observing mostly through the photos of others. But once in a while it's a good idea to look at the sky and get a reminder that those photos represent something real.

I got back from my annual eagle hunting trip to the upper Mississippi River today. It was rather warm and the birds were more widely dispersed than previous years, so I didn't get as many photos. See eaglephoto.net for a report and a link to photos. 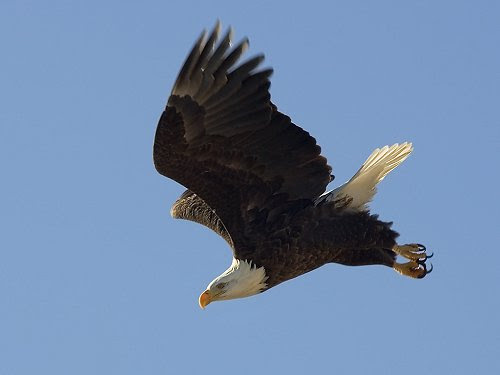 It was nice to see Bruce Sutter get elected to the Baseball Hall of Fame. Yesterday it was announced he barely got the required number of votes, making him the first pure closer to be honored. Along with Cal Ripken, Jr. and Tony Gwynn, Mark McGwire will be eligible to be elected next year. I think McGwire will get elected but he will have fewer votes than the other two due to that little steroids controversy. I still like my idea of closing the Hall to new inductees after this year. OK, one exception for Gwynn and that's it.

Tomorrow I'm off to Iowa in search of bald eagles again. I usually don't complain about it being too warm in January, but I have heard that for eagling, colder is better. I'm sure there will be a few eagles along the mighty Mississippi, so look for photos next week.

I got my first digital SLR in August 2002, and my first trip with it was to Maine to shoot lighthouses. My web site wasn't nearly as extensive as it is now, so I posted just a couple of images at the time. Three years later I have better software and more experience in dealing with color balance issues caused by mostly overcast skies, so I have posted six additional images in the "Around New England" gallery including this one of the light at Portland Head. 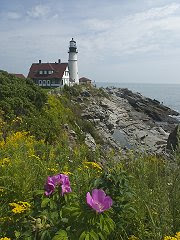 Digital cameras have really taken off the past couple of years, and I wonder what people are doing with all those image files. I'm guessing most don't bother to copy their files off to CD or DVD unless their hard drive is getting full. I have been asked, "My hard drive failed. How do I get the photos off of there?" I say, "Pull out your backup disk and get them from there," which usually elicits a dirty look. I'm also guessing there are some who don't even attempt to save their files; they delete them after printing them out. I may not have the nicest yard in the neighborhood, but one thing I am obsessive about is backing up my image files. Why bother taking photos if you don't want to preserve them?

Up until 1998, 100Mb Zip disks were adequate for my data backup needs. In 1998 I got my first (bad) digital camera, and also got a 650Mb/74 minute CD burner (newer models are 700Mb/80 minutes) and what I thought was a lifetime supply of blank CDs, a box of 100. That was long before I envisioned buying a camera that made an 8Mb file every time I fired the shutter.

I used some of those CDs to make music mixes. Lately, a couple of those old CDs have stopped playing about three-fourths of the way through, so I decided it would be prudent to copy everything off the data disks of the same vintage before they also failed. I just bought a 320Gb external hard drive, so I have plenty of room for the old stuff. My lifetime supply of CDs ran out in the summer of 2002, so that was the cutoff for "old" in the context of this project. As I feared, my new CD drive had difficulty reading the data off some of the old disks. I still have the old PC and CD burner in my basement, and fortunately the disks could still be read by the drive which made them.

The quality of images produced by digital cameras has come a long way since 1998. A lot of those early shots look almost like paintings, and I don't mean that in a good way. There isn't nearly as much detail as a modern camera can produce. As I copied those old 20th Century images onto my 21st Century hard drive, I came across a few where I wish I'd had one of today's cameras with me. Autumn leaves were as colorful as I've ever seen them on a drive across Massachusetts and New York in 1999. This shot was taken Oct. 16 with a Kodak DC210+ one-megapixel camera on the grounds of the Fenimore Art Museum in Cooperstown, NY. This image looks OK small, but at full size the detail is not there. There also was a lens flare from the sun on the right that I was able to crop out. 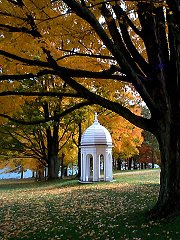 By 2000, I had upgraded to a Kodak DC290, a two-megapixel model. This was shot hand-held. I tried to brace against a light pole, and most of the rest from the sequence showed motion blur. Even with a few more pixels, the detail in this shot doesn't stand up upon close inspection. I had this image as my laptop wallpaper for quite a while. I still had the DC290 the following year during another trip to Washington. With lots of light, this one isn't too bad. I just gave this one the full Photoshop CS treatment, and it shows the color of the setting sun on the marble better than the version previously posted. Not that I want to start futzing around with film again, but I have a shot of the Capitol taken on medium format film that has a lot more detail. 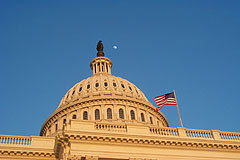 If fate ever finds me leaf peeping in Cooperstown or strolling the National Mall at dusk again, I would take another crack at these images with the better equipment I have now. But with family photos of years past, there are no second chances. You can go back and use photo editing software features that weren't available back then. But if you deleted the file, or if you hard drive failed and you didn't have a backup, you won't have that chance.

I managed to stay awake all the way to the end last night as Texas pulled it out against Southern Cal 41-38. I am left with one question: If Reggie Bush was the greatest football player of all time and space, as some pundits seemed to think prior to last night, why wasn't he on the field for the pivotal fourth-and-two with just over two minutes remaining? I don't have a problem with USC going for it, or with giving the ball to LenDale White, but I don't understand why Bush was over on the sidelines watching. Even having him in as a decoy would have affected the Texas defense, wouldn't it?

Of course after last night, the pundits have forgotten all about Bush and are now proclaiming Vince Young as the greatest football player of all time and space. The pressure on the Houston Texans to draft the hometown hero Young instead of Bush will be enormous.

It was a great football game, the type envisioned by those who created the Bowl Championship Series (That Is Not a Series). It proves the old adage about a blind squirrel occasionally finding a nut. Any year (most years) when there aren't exactly two undefeated teams from major conferences, the legitimacy of the championship game is suspect. This year the BCS cultists lucked out when Michigan scored on the last play of the game to inflict Penn State's only loss. The game proved something else that should be an adage: All-time great teams have both offense and defense. Pete Carroll made his reputation as a defensive coach, so it's ironic that his offense was so great and his defense was so deficient.