What would happen if the NFL were run by a bunch of extremely stupid people who based their playoff system on college football's BCS? It might go something like this:

Somewhere in an alternate universe, January 23, 2006: Despite their losses in the AFC playoffs to the Pittsburgh Steelers, the Indianapolis Colts and the Denver Broncos were voted to the top two spots in the NFL Super Poll Championship Series rankings and will face off in SPCS LX to be played in seven weeks on April 5.

Despite winning the AFC and NFC championships respectively, the Steelers and the Seattle Seahawks were deemed to be unworthy of playing in the SPCS championship game. After all, everyone knows that the Colts and Broncos are the best teams in the league. I mean, get real, the Steelers lost five games, and the NFC is like the junior varsity compared to the AFC! Although their game Feb. 26 is officially meaningless regarding the SPCS championship, the Steelers and Seahawks each hope that a win will help bolster their case for being voted the champion of the unaffiliated Associated Press poll.

Teams will earn $50 million each for participating in the SPCS. Each player will receive some books, $10 a day meal money, and a new iPod. Trivia note: Even though he's never actually won a conference championship game, this will be Peyton Manning's third SPCS appearance because the voters are smart enough to look beyond the results on the field. Everyone knows what SHOULD have happened in all those games he managed to lose. Manning says he'll probably go a bit stir crazy during the seven weeks off until the championship game, but "That's the way the system is so it must make sense to someone."

What would have happened back in 2002 when the Rams were the "Greatest Show on Turf?" Click here to find out.

The transit of Mercury is underway! But I won't be seeing it. The sky in the Northeast is overcast and dripping rain.

No Mercury today, so below is the Venus transit in 2004. In June 2012 I hope to improve on my Venus transit photos, and in May 2016 I'll get another crack at Mercury. Hopefully I'll be in a less dreary location for those occasions. 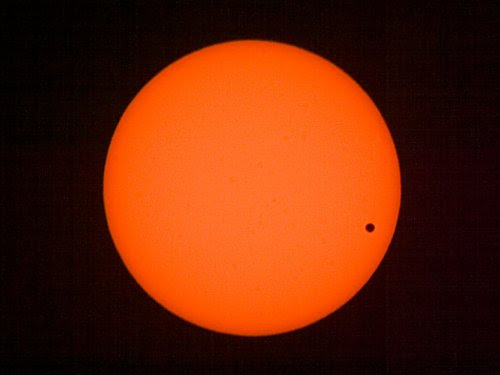 Considering that Venus is roughly the size of Earth, it shows how teeny and insignificant we are. Mercury is smaller and further away than Venus, so if you see it today it will be even more teeny. A fellow in Texas posted an early shot of the Mercury transit in a forum on the Cloudy Nights site. On the face of the sun is a gigantic sunspot that is several times as big as the planet.