During my newspaper internship in the summer of 1978, back when newspapers were still a thing, I was told that members of the editorial staff all wrote a weekly column. Unlike most college students then and now, I didn't think the world would be all that interested in my opinions and observations, but I dutifully complied.

I returned to that newspaper the following year for my first real job after graduation. The location was Sturgis, SD, which at the time had 5,000 residents, two competing weekly papers, and (as it still does) a huge annual motorcycle rally. I was working for the upstart weekly, which eventually bought out its older competitor and started publishing twice a week. From 1979-84, in addition to my newswriting and photography duties, I wrote a weekend sports column for the Black Hills Press and a mid-week general-interest column for the Meade County Times-Tribune. (The highlight of my column-writing career was getting yelled at on the phone by the governor of South Dakota, "Wild Bill" Janklow, for expressing my dismay when he abruptly withdrew without explanation the State Board of Regents nomination of a local man.) Both of my columns were topped by a head-shot sketch by the newspaper's artist, Penny Green. 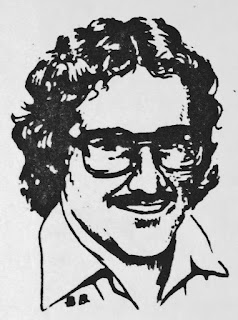 At this time of year when the Sturgis Motorcycle Rally gains the attention of the world for a couple weeks, I scan the Sturgis news to see if anything I'm familiar with has burned down or blown up. That's how I came across the obituary of Penny Harvey Green. She was age 78, survived by a large extended family, founded the Sturgis Art Show and Sturgis Cleanup, was a member of many community organizations, has her art displayed in countless places throughout the world, and was on the Sturgis City Council for 16 years. She was the type of person who makes a real contribution to the world and her community, unlike most who make it into what passes for the news these days.