I am a regular listener of the Tony Kornheiser Show, which is a daily podcast that evolved from a radio show on ESPN 980, WTEM in Washington. I have followed Mr. Tony throughout his career from the Washington Post to Monday Night Football to his current role on Pardon the Interruption on ESPN. I know he is an acquired taste and many people can't stand him, but as an old fart I appreciate his humor and I listen to his show every day.

I found an old MP3 player that I thought might be useful at the gym because, compared to my current phone, it is tiny. On there I found a download of the Tony Kornheiser show from February 2013. I sent an email to the show telling what I found, and that email was read on the show today. For me, this is the equivalent of mugging for the camera after spotting myself on the Jumbotron at a sporting event (which I would never do).

This is the email:

"I was cleaning up an old MP3 player and found a copy of the Podcast in its former incarnation from February 2013. Feeling nostalgic about a bygone era, I listened to it, and it happened to feature the first in-studio appearance of one Mr. Chris Cillizza. The topic was whether the abrasive Mayor of Chicago Rahm Emanuel would run for President in 2016 if Hillary decided not to, and Mr. Cillizza offered this insightful peek into the soul of America that we have come to except:

"Gary: Can you think of a President that has had that sort of an edge to him?
"Tony: No.
"Chris: His reputation is he loves to swear and is very confrontational. I'm not sure that's what people are looking for in a President."

Today the response to this was,
Chris: Nailed it!
Tony: Yeah.
Gary: Funny.
Chris: Is Rahm president? Thank you. You're welcome.

I have posted lots of elk images over the years, but most of these either were of semi-tame residents of wildlife parks or trailcam images. This image is notable in that is a free-ranging elk in the Black Hills that I snapped with my DSLR. I came around a corner and spotted this guy drinking from a stream near the road. He stuck around long enough for me to get a few shots. 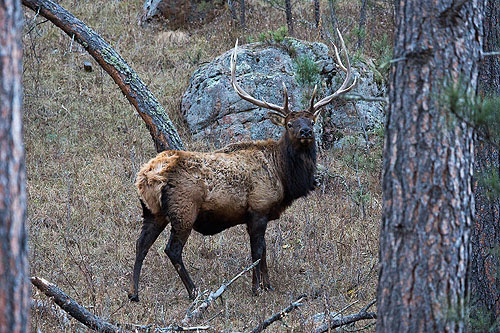