Word comes from Minnesota that an outdoor stadium has finally been approved for the Twinkies. From the numbers I've seen, county property taxes will provide nearly $400 million of public money. The state also is going to be paying $248 million for a new Golden Gophers football stadium. That leaves only the Vikings playing in the HumptyDome. I always thought the dome was a horrible baseball "park" but an adequate football venue.

Of course the Vikings do not agree. They want $675 million for their own new stadium, but that proposal did not get through the legislative process this time around.

I'm a sports fan and have some connections to Minnesota. The first major league game I saw was at old Metropolitan Stadium in Bloomington. I've been to baseball, college football and a Final Four in the dome, and I would vote it the worst stadium anywhere. But why should a Hennepin County property owner pay higher taxes to provide a better place for the Twinkies to play?

Massachusetts is legendary for the shenanigans perpetrated by its elected leaders, but at least in the state where I currently reside there has been very little response to attempted blackmail by major sports teams. The hockey/basketball arena in downtown Boston is owned by the Bruins and rented by the Celtics. Anytime the Celtics even think about asking for public money to build their own arena, they are quickly told to shut up. Fenway Park is owned by the Red Sox. Plans to build a new ballpark have been abandoned and the new owners are sinking money into improvements. The Patriots squeezed out a few public dollars for infrastructure improvements, but bore the cost of their new stadium privately.

I know the situation in each locale is unique, but if I were a Minnesota taxpayer I would be angry about so much money being confiscated from me to pay for stadiums.

Digiscoping is snapping images with a digital camera pointed through the eyepiece of a spotting scope or telescope. I've been dabbled in it for several years and just got the attachments for my Canon G6.

I calculate I get magnification of about 42x, or the equivalent of a 2100mm telephoto lens. It works pretty well for shooting chipmunks from about 20 yards. The telescope mirrors the image right to left so I had to flip this in Photoshop to get the orientation correct: 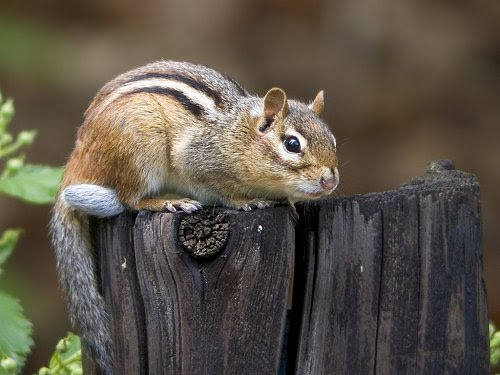 Focusing is partially manual, and it's probably impossible to follow a moving subject. I still want to get a real telephoto lens for my DSLR, but I'll wait a while until I have the opportunity to use it effectively. (As a Canon shooter, by "real" I mean a Big White Lens such as the 500mm f4.) Until then, digiscoping should work well enough for shooting nests and other stationary or predictable subjects.

ABC is providing ample evidence this week of why the so-called "major" TV networks are no longer worthy of notice. Tonight there is a special featuring David Blaine holding his breath for nine minutes. (For some reason this will take two hours of TV time.) Tomorrow there's a button-pushing, panic-inducing movie about the bird flu. (Another wasted two hours.) Neither is on my reminder list.

The only network shows I watch these days are NFL Football and Lost. The former is out of season, and after last week's episode I'm starting to wonder why I bother with the latter, which also happens to be on ABC. "Hey I've got an idea, let's drop the ponderous pace for a few seconds and gratuitiously shock everyone by shooting a couple of the gals."

The eighth and final Red Dwarf

series on DVD has finally arrived on these shores, seven years after it was produced for the BBC. After watching it, I thought the story lines were pretty good (what could be better than a T-Rex stomping around inside a spaceship?) but the writing of the individual scenes didn't always rise to a high level. I agree with criticisms I've read that the final series was not as good previous years, but any Red Dwarf is far more interesting than watching David Blaine hold his breath.

Keeping a blog is a somewhat public way (is there anybody out there?) to jot down things that I want to remember. I just got back from a trip to Denver and there is something I want to preserve for future reference.

Memo to self: Avoid United Airlines.

United's "Economy Plus" program is a way for the bankrupt airline to try to squeeze a few more dollars out of customers who have already paid for a ticket. Instead of going along with the extortion and paying extra for a better seat, I ended up wedged into a middle seat in the back of the plane. I haven't been so miserable on a flight since coming back from Chile, and that flight took three times as long as this one. Hopefully the jabbing pain in my shoulder blades will go away within a week or so.