What's going on in Europe? First, Frenchman Zinedine Zinane delivers the "Head Butt Heard Round the World" in the World Cup final, then a British jockey head butts a horse. (I won't say what the jockey's last name is but I emphatically deny that I am related to him.)

I blame soccer. Headers are an encouraged tactic in that sport, and it's a short hop from there to head butting. It's obvious that we need to snuff out soccer in the USA before the epidemic of head butting reaches our shores. Here we have a time-honored American way of taking out our frustrations on the field of play – by rifling fastballs at the opponent. Yep, Ozzie Guillen is mad at someone again.

Please children, don't use your heads as projectiles. Throw inanimate projectiles with your arms, as God intended.

Rather than fill up this blog with all the turkey sightings from my yard, I've made a new page and put everything turkey on there. See The Turkey Diaries.

Last month I digiscoped the full moon. Last night with the moon waning I took some more shots to see the effect of a different lighting angle on the craters.

Craters are more evident in this image, especially near the twilight zone, than in the full moon image with the light shining from directly above. This is a crop from the upper-middle of the previous image. At lower left, the crater with the obvious center peak is 100 km across and is called Theophilus. The white line at upper left is the Montes Apenninus mountain range. Once again, craters are much more evident with the sun hitting the craters at an angle rather than from directly overhead. 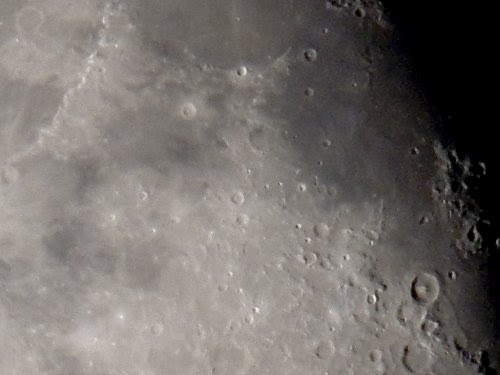 It was as clear yesterday in the Northeast as it has been in weeks so I also took a look at the sun. The regular solar filter showed no sunspots large enough to notice, so I'm not going to post any of those images. The Coronado PST showed just a few small prominences. I've given up trying to find the right gadgets that will let me do photography through the PST.

There are two kinds of folks in the world – those who golf and those who have better things to do. Although I owned clubs for more than 30 years and occasionally used them, I never had the mindset of the typical golfer. And now there's no doubt that I'm a non-golfer – I gave away my clubs today. They were quite lame clubs, a half set of Spaldings that probably were the cheapest available at the local K-Mart in the mid-70's.

I liked golfing either alone or with my Dad on a rural course with greens fees of $2 a day (Tomahawk Country Club near Deadwood circa 1974), and with no people around to go "tut-tut" if you hit a bad shot and took a mulligan (or three). Such circumstances exist only in memory. My Dad is no longer with us, greens fees are a bit more than $2, and on today's crowded courses only Bill Clinton dares to take three mulligans.

On a typical uncrowded day, my Dad (who took up the game at the same time I did) spent as much time looking for lost balls as he did golfing. Even if he hit it straight down the middle, he would detour into the Black Hills forest to see what he could find. Although he got more fixated on his scoring later on, at first his definition of a successful day on the course was ending up with more golf balls than he started with.

Sometimes even the Deadwood course got busy and we had to form a foursome with strangers. On such a day on a par 3, I skulled my tee shot and it bounced to a stop about halfway to the hole. Since that is what I usually did with my short irons and since it hadn't gone into the woods, I considered it a semi-successful shot. However, one of our new friends decided I would benefit from some of his coaching. I decided that he needed to mind his own business. I'm fairly sure that I'm not coachable.

Later when I lived in Sturgis, I avoided such people by never golfing at the country club. Instead I whacked the ball around the abandoned sand green course at the Fort Meade Veterans Hospital. They mowed the fairways (or maybe "hayed the pasture" would be more accurate) a couple times a year, and the sand greens were completely neglected. It was free, I never saw more than one other person at a time, and I loved it.

A few years later when golfing with my boss on a real course in Sioux Falls, I hooked a drive into the weeds and the urge came over him to attempt some coaching. After imparting his wisdom, he stepped up and hit a shot twice as bad as mine. Ah, memories! I consider that one of the top moments of my golfing "career." When golfing with my co-workers, if I was having my usual bad round I would just stop keeping score. I knew I was awful and would never participate in any wagering. Because of this (and my complaints about being forced to get up before dawn on a weekend) they didn't invite me very often.

When I moved East, the sticks came along but the only use they ever saw was a couple of trips to the driving range. I never invested the time and money necessary to become a better golfer. (I never owned a pair of golf spikes!) With the cost of equipment, ugly lime green pants, silly shoes, gambling losses and travel, it can quickly add up to serious cash. Paying to play poorly in front of other people with more people waiting impatiently behind is not my idea of fun.

Being a cheap, antisocial golfer hasn't been easy, so now it's a tremendous relief to officially join the ranks of the non-golfers.

Here's a bird that really lives up to its name, the Rose-breasted Grosbeak. It's got a big red patch on its chest and a great big beak for opening seeds. I first saw one of these at my feeder a few years ago, and today got this digiscope shot. You can tell this is a male because the females are much plainer. 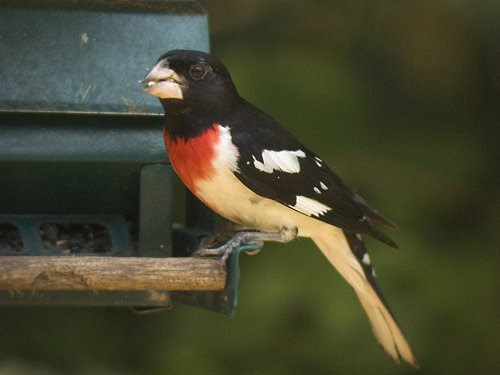 I've added two images of this and a few more chipmunks and goldfinches to the Point and Shoot menu. Here's one of the goldfinches. This image was underexposed a bit, but by shooting in RAW mode on the G6 there was plenty to work with in Photoshop CS. 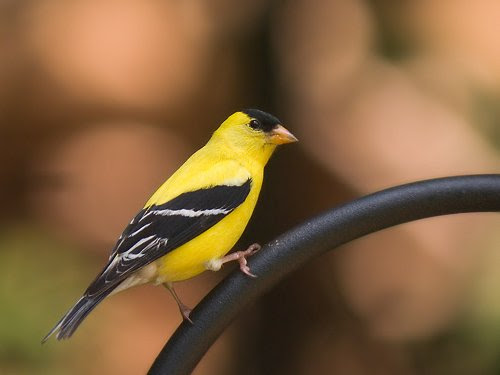