Originally posted on Squeezebunt.com in 1999.

When I visited Cooperstown in July for the Hall of Fame Induction Ceremonies, the baseball museum was packed and I decided to visit at a less-hectic time. In mid-October, I returned to see what I missed the first time. The drive through New York State was very scenic as the tree-covered hills were ablaze with fall colors.

In addition to being the mythical home of baseball, Cooperstown has an extensive history. The Cooper family for whom the town is named included James Fenimore Cooper, a famous 19th-century author. On the former site of the family home at the south end of Lake Otsego is the Fenimore House Museum, which has an eclectic collection of art and historical items. Across the road is the Farmer's Museum, which we didn't visit but which may be of interest to some. But of course the primary target of most visitors to the area is the baseball museum. (Combination tickets for the three Cooperstown museums are available.) There is just so much stuff in the baseball museum that it's impossible to see it all. 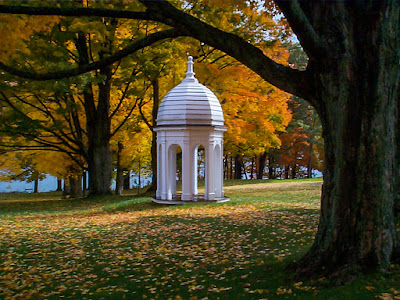 A gazebo on the Fenimore House Museum grounds, Cooperstown.

I've seen old gloves before, but somehow seeing groups of them in the display cases made me realize why there are no more .400 hitters. There was little or no webbing on the old gloves, just a little padding. Don't you suppose that even Rey Ordonez would let a few more balls get past him if his glove didn't have webbing? Ted Williams' glove on display had webbing and a pocket, but it was still quite a bit smaller than a "modern" glove. I would presume this glove was from the '40's, and by the time Ted retired he was using something bigger.

The history of baseball is a large part of what makes the sport so great, and true baseball fans should make a point of visiting Cooperstown someday. Part of Barry Halper's famous and vast collection was on display in the museum. (See the catalog from Sotheby's auction of part of the Halper collection.) He started collecting many years ago before it was considered an industry. Babe Ruth's overcoat is on display, and there is a story attached on how it was handed down over the years.

But really, it's just an old coat. After soaking in all the history, eventually the fan puts aside the "memorabilia" (ugh!), go down to the ballyard, and watch some real people playing a real game. So that's why I'm going to Arizona this month.