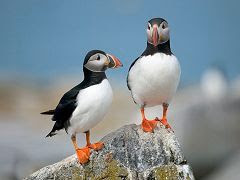 I like this contest. I'm the judge, jury, and the only one eligible to enter. The grand prize is a long weekend in Keokuk, Iowa Jan. 13-18, which I have duly awarded to myself. I gave consideration to some of my griz shots from BC, the New Mexico harrier, and recent Galapagos images, but my favorite photo of the year was taken in August in the Gulf of Maine. It is of two puffins on Machias Seal Island, which is part of either New Brunswick or Maine depending on whom you ask.

Although I'm happy to have my new 8-megapixel Canon 1D Mark II, this selected photo is one of the last taken with my 4-megapixel 1D.

I headed down to the Galapagos on Dec. 10 and got back home late on Dec. 19. Yesterday I started in on the photos and I'm sure 50 or more will make it onto the site. [Update: Or maybe 107.] I've posted a few and more will be coming. One minor detail - I have seen two different spellings of "vermillion" as in "vermillion flycatcher." Since I went to the University of South Dakota in Vermillion, I'll use two L's at the risk of being out of step with sources such as the USGS.

After weeks of pondering my lens selection, I ended up taking the 17-35mm f2.8, 70-200mm f4, and a 1.4x extender. The alternative to the 70-200mm would have been the heavier 100-400mm. I don't know whether "tame" is the right word, but the wildlife in the Galapagos is relatively unafraid of humans and it turned out that the 70-200mm was long enough most of the time. I used the extender a few times but not extensively. Add the S45 P&S, ZR60 camcorder, and other electronics, my backpack was heavy enough. I haven't used the 70-200mm much except on the trips to Antarctica and Galapagos, so I guess it is my exotic location lens. I can't get quite so close to the Mississippi River eagles next month so will be taking the 100-400mm, but I can eliminate the 17-35mm and the extender.

I have too many gadgets so have been making the effort to clear out camera equipment that hasn't been used much recently. I've sold off three cameras and am now pondering which lenses should go. The Canon 100mm f2.8 macro and the venerable 300mm f4 are candidates for the chopping block. The macro is considered to be a good lens but I just don't use it enough. The 300mm was my first Canon "L" (premium) lens more than five years ago, but most of the time the 100-400mm makes more sense.

I only made it to three Arizona Fall League games during my two weeks in the Southwest in October, but baseball never strayed far from my consciousness as I was chasing balloons and hawks. The only cap I packed was the dark blue one with the red "B" I picked up in March at City of Palms Park, Ft. Myers, Florida, spring training home of Your Boston Red Sox. The number of positive comments I received in New Mexico and Arizona while wearing the cap left no doubt that Red Sox Nation extends far beyond the borders of New England and Florida.

The first part of my tour coincided with the nightmarish portion of the Red Sox playoff run, but as the history books will forever show, they managed to come back from the brink to inflict the ultimate humiliation on the Yankees. I followed along from various hotel rooms in New Mexico and Arizona. Days later as my plane was making its final approach to Logan Airport, the lights of the World Series at Fenway Park could be seen off to the west. It was Game 2, the 2nd "Bloody Sock" game. After a Red Sox victory there and a two more in St. Louis, it was over, all over, and the Nation went crazy. I'm just relieved that all the idiotic (and often inaccurate) stories about alleged curses are over, forever. Or at least until the Cubs make a run. (One thing though: If the Red Sox were cursed and the Cubs still are cursed, what's the White Sox excuse?)

But let's flash back to Ft. Myers, March 7: The manager of the visiting Yankees, the extremely famous and successful Joe Torre, carries his lineup card to home plate before the game. A Red Sox coach performs the duty for his team. Torre's manner changes as he recognizes his counterpart in this routine task -- Johnny Pesky, 84 years old at the time, entering his 63rd year in baseball, 52nd with the Red Sox as player, broadcaster, coach and manager. The respect and kind words Torre bestows on Pesky are obvious even though I am much too far away to hear. (Even Red Sox fans are quick to acknowledge that Joe Torre is a great and admirable man. But Boss George, Giambi and those other mercenaries are jerks!)

Pesky is probably the only person with a foul pole named after him, the right field pole at Fenway Park, but the title of World Series champion eluded him throughout his career. His best chance as a player came 1946, but the great Ted Williams hit only .200 and the Cardinals beat the Red Sox in seven games. The current players made sure the old shortstop was right in the middle of the October 2004 locker room celebration. They sprayed him with champagne and gave him the big trophy to hold.

If the reaction of Red Sox players and fans to the victory reminded us of anything, it is that baseball is handed down through generations. I'll admit I didn't know anything about any of the players in this year's Arizona Fall League. I went to three games and took a few photos. But I did notice a couple of the names -- Tony Pena, Jr. and Tony Gwynn, Jr. The sons emulate the fathers, and Derek Lowe shares a trophy with Johnny Pesky. Even in a sport with no clock, time marches on. 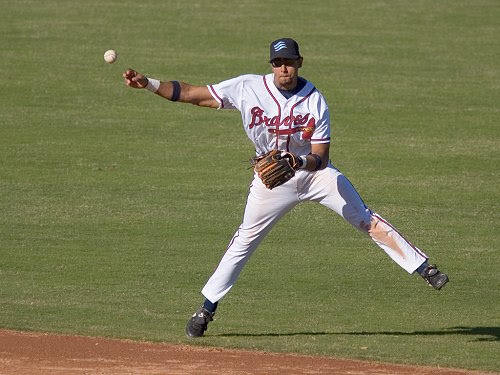