I drove north of Great Bend, Kansas today to check out the Cheyenne Bottoms area, which includes a state wildlife management area and some Nature Conservancy land. I can see why birdwatchers flock here; there's lots to see through binoculars and spotting scopes.

But my conclusion after two days of touring is the best photo ops are in Quivira NWR to the south. Most of the images I got were on the Wildlife Loop next to the Big Salt Marsh in the northern part of the refuge. And proving once again that I'm not a birder, I had to consult my bird books to see that this is a Wilson's Phalarope. 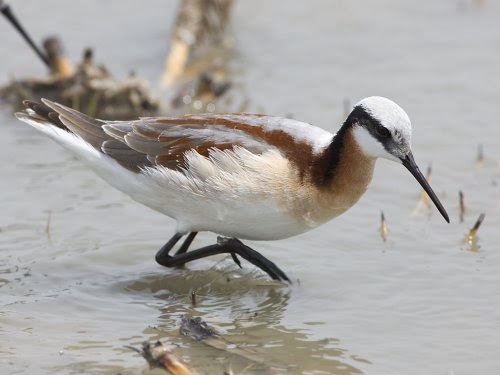 It was tremendously windy today. I would guess it was a steady 35 mph. There was a high overcast in the morning, but it blew away in the late afternoon, so at least the lighting was good for a few hours. The owls I saw yesterday were both huddled inside the barrel nest. The adult seemed to be seeking some protection from the wind.

Salt of the Earth

I'm doing a week in Kansas, hoping to see the shorebirds as they migrate through Cheyenne Bottoms in the central part of the state. On the way I drove through one of my usual spots, Squaw Creek NWR in northwest Missouri, and saw a few little shorebirds flitting around there. The active eagle's nest is now in a location nearer the road than a few years ago, so I will stop again on my return and try to get some images in morning light.

Another stop was the Kansas Underground Salt Museum in Hutchinson. I suppose Kansas might suffer from an image problem as a boring place to visit, but two of the "8 Wonders of Kansas" are in Hutchinson. I've been to the Kansas Cosmosphere a couple of times, but not the salt mine until today. It's 650 feet deep, which is the second-deepest mine I've been in. (During my journalism days 25 years ago, I went 8,000 feet down into the Homestake Gold Mine.) I'm not going to go into a lot of detail, but if you are ever stuck in Hutch for a day, visit the Cosmosphere first, the salt mine second, then go have BBQ dinner at Danny Boy's on Main Street.

I didn't get to Cheyenne Bottoms State Wildlife Area or the Nature Conservancy's Preserve today, but I did go through the nearby Quivira NWR. I saw a large owl, probably a Great Horned, in a tree on the opposite side of a pond. It was too far and dim for good images, but I might try again tomorrow. I know it will be roosted in the same area because there was a young owl peeking out of one of the barrel nests constructed in the pond a few yards from shore.

And there were pockets of shorebirds. This is an American Avocet. 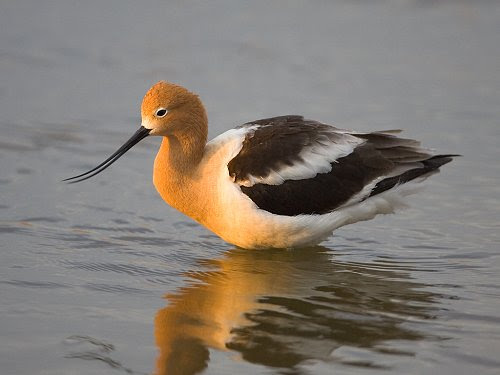