My only planned stop on the way home from the Black Hills was a return to the raptor nest near Quinn. Once again the young one in the nest wasn't very cooperative, standing to stretch for just brief moments. And still there was no adult in sight. But based on size, coloration and habitat, I'm fairly certain in identifying it as a golden eagle. 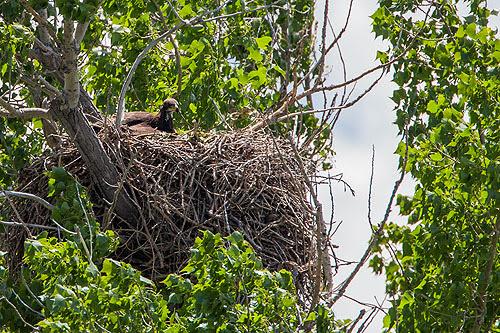 I took a shortcut on the way back to I-90 and saw this cooperative subject on a post near the road. After scouring my Sibley bird book, I'll say it's an Upland Sandpiper. 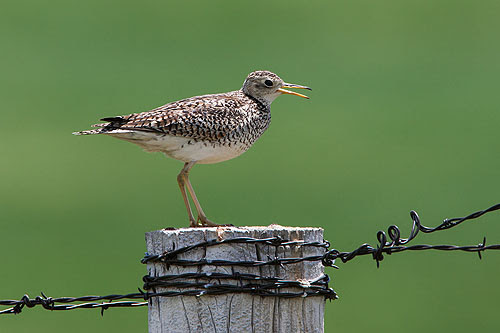 Way back in 1977 when Spielberg did Close Encounters of the Third Kind, there really were coastal dimwits who thought Devils Tower was a special effects creation. I set out today to prove that is not true.

From Custer I drove up the west side of the Black Hills, in other words the Wyoming side. Keep going long enough and eventually you run into this ancient volcano plug. 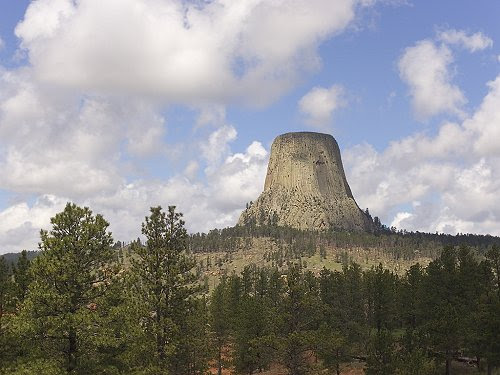 It's a national monument, and the admission price to the grounds is $10. Unless you are planning to do some hiking/climbing, or you need a ranger to tell you all the factoids that you could read in the brochure, I don't think it's worth $10 to get a slightly closer view than you can get from the highway.

It didn't take long to get my snapshots and drive on to Spearfish, so before checking into my hotel I took a ride through Spearfish Canyon. It might be heresy to say so, but I think this drive is overrated. I think there are many more lovely canyons and valleys in the Black Hills, but they don't have paved roads running through them and they don't get the publicity. I drove back to Spearfish via gravel county roads. There were a few potholes to avoid, but I thought it was just as scenic as the canyon. Don't tell anyone.

Another day of roaming around Custer State Park produced some family images of prairie dogs and bison. The adult bison are still shedding their winter coats. See below.

But the day's goal was to find some of the alleged 1,000 elk that roam the park. The lady at the wildlife center pointed me to the appropriate location, but warned that they usually didn't come out until dusk. Sure enough, I didn't find any during the day.

Although it was getting dark, I decided to make one last attempt and drive east toward the Game Lodge before heading back to my hotel. I spotted a car a few hundred yards ahead stopped and looking at something, so I slowed down. It turned out to be six elk a few yards back in the trees. Since it was almost dark, I set my camera's ISO to 3200 and fired. The images aren't worth posting, but they do prove there are elk in the park. 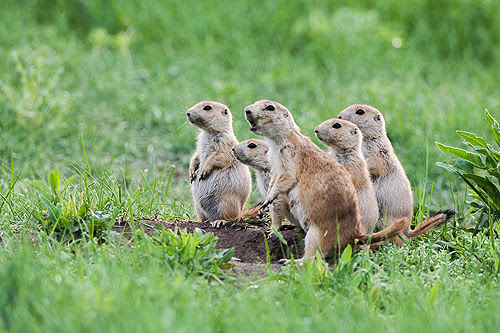 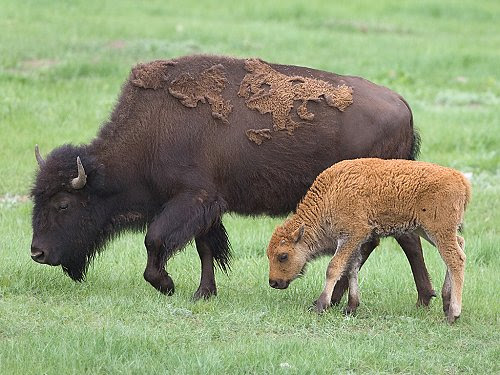 I figured I had better get to the Black Hills before they are completely overrun by tourists for the rest of the summer, so I embarked today. On the way I took a short detour north of I-90 near Quinn to check out a raptor nest near the road that I spotted a few months ago. There is a young raptor in the nest, but it didn't sit up to provide a good view and there were no adults in the area. My guess is it's a golden eagle, but I could be wrong.

I arrived at Custer State Park at 4:00, which left plenty of time to drive some of the back roads before dark. The park and South Dakota National Guard are hosting 4,000 soldiers from various units for two weeks, and some of the usually deserted back country spots are occupied. Most of the gravel roads have a good surface but are very narrow. I came across a military truck sitting at about a 30 degree angle with the two right wheels dangling over the ditch. And two despondent-looking soldiers trying to figure out how to get it back on the road.

The sarge (I'm guessing) said they had to swerve to avoid deer crossing the road, and asked if I would take the private (I'm guessing) back to the nearby camp to get help. The front seat of my car was jammed with camera gear and a cooler, so the private had to ride in the back. As we approached the crest of a hill, he said, "Here is fine." I was confused as to why he wanted to get out there so I continued on over the hill, then saw the camp about a quarter mile further on. Apparently the GI didn't want his buddies to see him rolling into camp in the back of an old Camry, so he hopped out there and started jogging toward camp as if he had run the three miles. Remember Rosie Ruiz?

Anyway, when I wasn't on military transport duty I managed to get this shot of pronghorn twins and mom. And I saw a rainbow. Click on the images for larger versions. 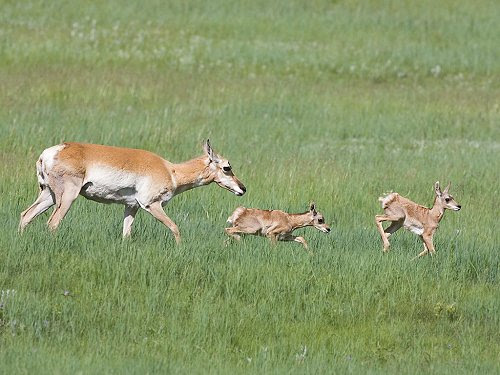 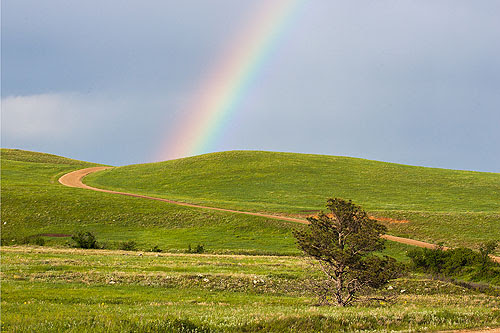